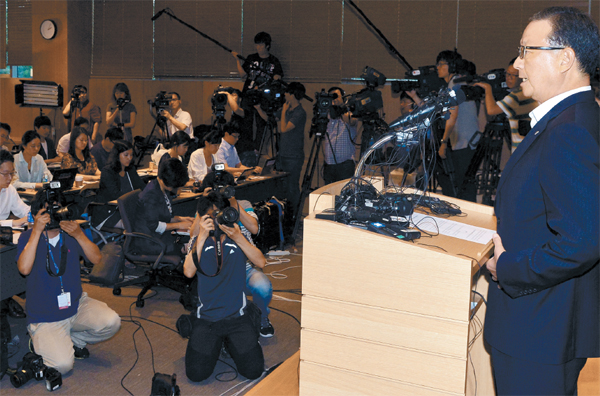 After news of the crash of Asiana Flight 214 broke last weekend, local travel agencies started receiving calls from people who had made flight reservations. Their questions included whether the plane they are flying is a Boeing 777-200 - the aircraft that crashed on landing in San Francisco - and how much they would be reimbursed if they canceled their tickets.

Although there have not been a significant number of cancellations for Asiana, local agencies note that travelers are increasingly anxious about using the local carrier.

“We have six people leaving for the United States on Asiana Airlines today and none of them has canceled,” said Chang Sun-young at Top Travel’s Wangsimni branch in northeastern Seoul. “Though we haven’t received any cancellation requests on booked reservations, there have been inquiries from customers about the safety of the airline.”

Tour agencies note that if anxiety spreads among travelers, demand for Asiana Airlines flights or travel overall could shrink ahead of the peak summer travel season.

“For new reservation inquires, customers seem to want to avoid traveling with the airline,” said Lee Bo-eun of Onnuri Tour.

Travel agents say that when an aviation accident happens, fear of flying could spread and sharply reduce travel demand, at least in the short term.

“We need to wait and see how the Asiana Airlines crash will affect demand after the exact cause of the accident is determined,” said an official from Hana Tour.

Even though the cause of the crash is not yet known, industry insiders worry the Asiana Airlines tragedy could ruin the nation’s reputation for safety. In 2008, Korea topped the International Civil Aviation Organization’s Universal Safety Oversight Audit Program after scoring 98.89 points out of 100.

“It will depend on the investigation result, but, regardless, it’s a huge blow to the entire aviation industry in general, because people will have a negative impression of Korean airlines,” said an official from a local carrier.

The accident occurred just three weeks after the Ministry of Land, Infrastructure and Transport announced plans to improve the country’s overall aviation safety and just two weeks after it said it would conduct a special inspection on safety in general.

According to ministry data, over the past 10 years 115 aviation accidents have occurred involving local carriers, resulting in 23 deaths. Last year, there only one aviation-related death, while the number of small accidents increased. There was also an increase in safety failures, which surged to 948 last year compared to 791 in 2011

Yesterday, the ministry announced that it will come up with added safety measures Aug. 25. It also asked airlines to conduct intensive training for pilots who fly to airports with difficult landing or takeoffs. The ministry said it inspect the engines and landing systems of Korean Air’s 37 B777s and Asiana’s remaining 11.

Before the Asiana crash, the reputation of the nation’s aviation industry took a hit with an emergency landing of a KAL B777-300 last week. The Seoul-bound flight from Chicago made an emergency landing at Anadyr Airport in Russia last Tuesday due to an engine problem. The 273 passengers continued to Seoul on another plane.

The transport ministry said later that the engine problem was due to production defects in a gearbox made by General Electric in the left engine.

The plane crash has put Asiana Airlines in trouble business-wise, adding to challenges it had already been facing amid the sluggish economy and weakening yen. Analysts expect earnings of Asiana to drop because of the accident.

Yesterday was the first trading day since the crash and shares of Asiana Airlines lost 5.76 percent, the most in almost three years, to close at 4,825 won ($4.20).

Local airlines, particularly Asiana, have also been affected by the drop in the number of Japanese tourists who for the past several years had been enjoying Seoul as a nearby destination. Compared to Korean Air, Asiana offers more short routes.

According to the Korea Tourism Organization, from January to May this year a total of 1.1 million Japanese tourists visited Korea, a 24.9 percent drop compared to the same period in the previous year, mainly due to the weakening yen.

“Despite peak seasonality in the third quarter of this year, the weakening of the won and the recent surge in fuel prices will likely weigh on airlines’ profitability,” said Martin Song, an analyst at Woori Investment and Securities. “Until a clear earnings improvement is observed, we suggest delaying investment in the sector.”