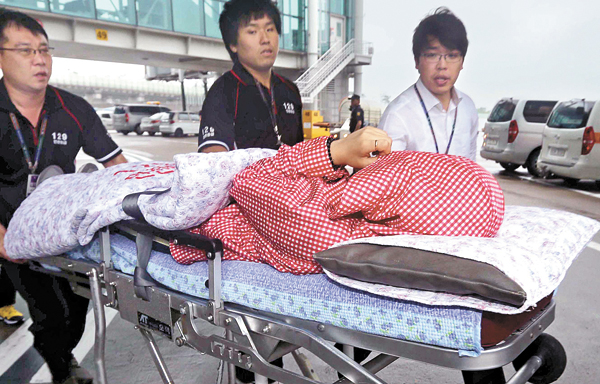 An Asiana flight passenger on a gurney is moved to an ambulance in Incheon yesterday after 11 survivors flew back to Incheon International Airport from San Francisco. [Joint Press Corps]

Following the horrific crash-landing which killed two and injured over 180 people in San Francisco, including 38 Korean passengers, eight Koreans were undergoing treatment for serious injuries while 11 survivors arrived yesterday back in Incheon International Airport.

The 11 Korean survivors of the Asiana Airlines plane crash Saturday in San Francisco International Airport arrived back in Incheon via a special flight around 3:40 p.m. and were greeted by their family members who had been waiting for them all day, as well as a flurry of some 200 reporters and cameramen.

Two ambulances were parked outside the airport for two of the survivors that had unspecified injuries but had opted to return home. Some 130 Asiana passengers whose flights were delayed because of the accident also returned yesterday via the special flight.

Asiana said that family members of the injured have also departed to San Francisco and more will do so today.

A man in his 50s waiting at the family reception room at the Incheon airport said that he heard of the news of the plane crash around 7 a.m. Sunday.

He told the JoongAng Ilbo that all his relatives “were in a sense of panic” and that he only knew that his unspecified family member “was in a hospital in San Francisco getting treated” and that he did not know which hospital.

The Transport Ministry said yesterday that it confirmed with the general consulate in San Francisco that of the 38 injured, less than the original number of 44 that included Korean-Americans, eight remained hospitalized and that though some were seriously injured, their lives were not in danger.

The rest of the treated patients were released from the hospital.

Four crew members were also injured, one of them seriously. The four pilots and co-pilots were not injured and were staying at a hotel to cooperate in the investigation.

Asiana Airlines Flight 214 had 291 passengers and 16 crew members aboard the aircraft, of which 77 were Korean, 141 Chinese and 61 American. The remaining passengers included Japanese, Indian, Vietnamese, Canadian and French citizens, according to Asiana, the nation’s second-largest carrier.