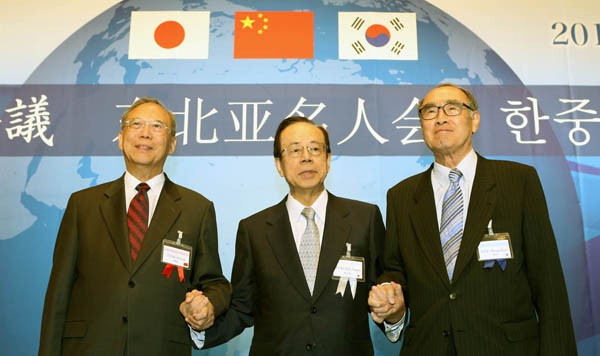 HOKKAIDO - At a joint symposium between Korea, Japan and China, 30 experts in finance, trade, energy, environment, education and culture gathered here to adopt 800 commonly-used Chinese characters to use between the three countries yesterday.

While these three neighboring countries are riddled with ongoing historical and territorial disputes, for the first time they agreed to adopt the measure to allocate standard Chinese characters and convey it back to their home governments.

“The three countries sometimes squabble and snarl at each other, but are destined to be bonded because of location, history and people,” Yasuo Fukuda, former Japanese prime minister, said. “Having common words in Korean, Chinese and Japanese is absolutely necessary for mutual understanding.” He added it is a time of “glocalization” a portmanteau of globalization and localization.

The forum, co-sponsored by the JoongAng Ilbo, China’s Xinhua News Agency and Japan’s Nikkei, is aimed at boosting nongovernmental exchanges among the three countries.

Deciding to adopt unified standard Chinese characters was first proposed by the Korean delegation to the symposium three years ago.

The forum said in statement, “If the youth of the three countries become familiar with the 800 Chinese characters, this will set the intellectual foundation to understanding each others’ language to a certain extent.”

The forum will be held in the fall in China to further discuss how to utilize the shared Chinese characters. This forum between the three countries is the most senior-level meeting between Japan and China since bilateral relations deteriorated last September over the Senkaku Islands, called Diaoyu by Beijing, in the East China Sea.