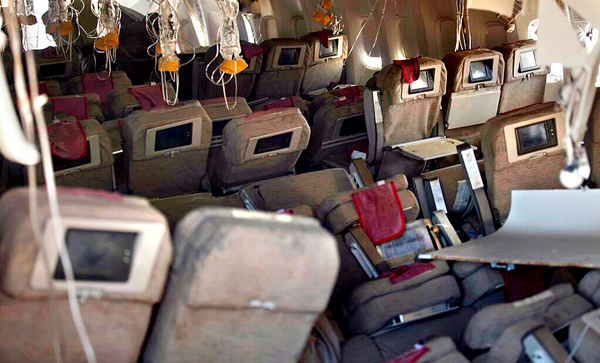 The interior of Asiana Airlines Flight 214, which crashed on Saturday at San Francisco International Airport in San Francisco, California, is shown in this U.S. National Transportation Safety Board handout photo released on Sunday. The Asiana Airlines Boeing 777 was traveling “significantly below” its intended speed before it hit the seawall in front of the runway, the U.S. National Transportation Safety Board said on Sunday.[REUTERS/NEWS1]

The National Transportation Safety Board (NTSB) that is investigating the cause of the crash of Asiana Airlines Flight 214 at the San Francisco Airport said the pilots attempted to abort the landing 1.5 seconds before the jetliner hit the runway and broke apart.

Deborah Hersman, chief of the NTSB, said at a press conference held on Sunday U.S. time that the flight data recorder (FDR), or black box, in the cockpit showed that pilots Lee Gang-guk, 45, and Lee Jeong-min, 48, tried to increase the flight speed seconds before it clipped the sea wall and then crashed on the 28L runway.

Around 11:30 a.m. on Saturday U.S. time, Asiana’s Boeing 777 plane traveling from Incheon International Airport to San Francisco with 307 passengers and crew crashed after the tail section of the plane hit the runway, killing two Chinese girls aged 16 and 17 and injuring at least 182 more.

“We found that the pilots attempted to abort the landing about 1.5 seconds before it crashed and tried to gain altitude in a hurry after we examined the FDR that recorded the pilots’ voices during the flight,” Hersman told reporters.

She added that the pilots had notified the airport’s control center of a “go-around,” or aborted landing, indicating the jet would ascend and circle to approach the runway again.

She also said that the pilots were warned from the airport’s control tower that they were coming in too low and too slow.

They were directed to boost their airspeed about seven seconds before the crash.

A command to “increase speed” by one of the pilots was recorded by the FDR. About four seconds before the crash, the aircraft’s stick shaker - equipment that shakes, telling the pilots of an impending stall - went off.

The plane was coming in far under the recommended speed.

“We are not talking about a few knots here,” Hersman was quoted as saying in the press conference.

In general, the appropriate airspeed for landing is about 137-142 knots per hour (157.7-163 miles per hour). However, Hersman didn’t say anything about why the aircraft was coming in so slow.

“Finding out why the pilots approached the runway at that level of speed will be the key to finding the cause of the crash,” Lee Jang-young, a 10-year veteran pilot with Korean Airlines who has been flying B777s for six years, told the JoongAng Ilbo. 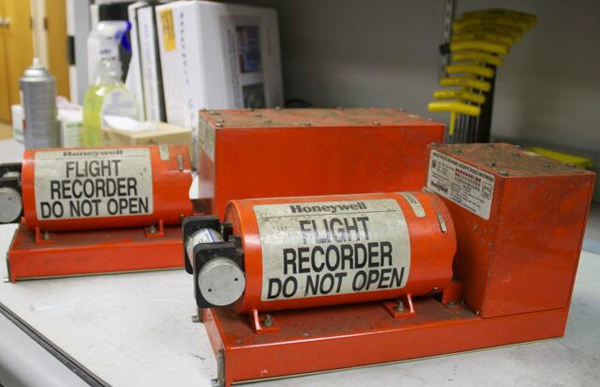 “All B777 planes have auto throttle, a system that guides a plane to fly at an appropriate speed during landing. If it is operating normally, the system automatically boosts the airspeed if it is approaching the runway slower than 137 knots. It is basic knowledge for all B777 pilots to turn on the auto throttle for landing.”

The NTSB said they weren’t able to find any signs of mechanical failure when they examined the FDR, stating that the engines, produced by Pratt and Whitney in 2006, and wheels operated normally.

“We still have a long way to go [to find out the exact cause of the crash],” Hersman said.

The pilot, Lee Gang-guk, was making his first landing with a Boeing 777 at San Francisco International Airport, Asiana said. But he had flown to the city several times between 1999 and 2004 with other planes, the airline said.

The South Korean government said there is a possibility that the plane might have had technical defects.

The Ministry of Land, Infrastructure and Transport said the plane had been repaired after oil was found to be leaking from its No. 1 engine at the same airport on June 2.

Asiana confirmed that the plane stayed in San Francisco for 29 hours for repair and departed to Incheon around at 4:30 p.m. the next day.

“We don’t think the defect is related to the crash,” a spokesman for Asiana Airlines said.

But the Transport Ministry said yesterday it will inspect every engine and landing gear on B777 planes being operated by Korean Airlines, which has a total of 37 B777s, and Asiana, which has 11, until August 25.

After the NTSB said that the pilots attempted to abort the landing and boost the aircraft’s airspeed, aerospace experts saw such attempts as the pilots’ self-rescue effort.

“The reason that the pilots tried to go back to the air is because they wanted to prevent a fatal accident,” professor Chang Jo-won from the Korea Aerospace University told the JoongAng Ilbo.

“Such measures like the go-around are made when pilots find something is wrong during landing, but I think 1.5 seconds was too short to lift the aircraft. It is still questionable why the pilots let the jetliner get into that situation that late.”

It is also a mystery why the jet used the 28L runway for landing. The NTSB said that the “glide slope,” a system meant to help planes land, for the runway 28L had been inoperative since June 1, but that can’t be considered as a cause of the crash.

“Other types of global positioning systems [GPS] that can help landing operated normally for the runway at the time,” Hersman said.

The condition was notified by a Federal Aviation Administration Notam (Notice to Airmen) issued in June.

When a Boeing 747 plane operated by Korean Airlines crashed at Agana Airport in Guam, killing and injuring about 230 passengers in August 1997, the glide slope didn’t operate normally.

“It must be checked whether the airport’s control center had re-designated the runway to 28L for flight 214,” a pilot of Airbus told the JoongAng Ilbo.

“The airport’s control center can re-designate a runway for incoming flights but they should notify the change at least five miles before landing.”

As divergent opinions over the cause of the accident have been raised, the authorities in both the U.S. and Seoul and Asiana Airlines are accelerating its investigation to find out the exact cause of the crash.

The result of the investigations will directly impact those airport authorities, the airlines and the manufacturer.