Rainy season gets wet, wild as storm soaks the country

Rainy season gets wet, wild as storm soaks the country 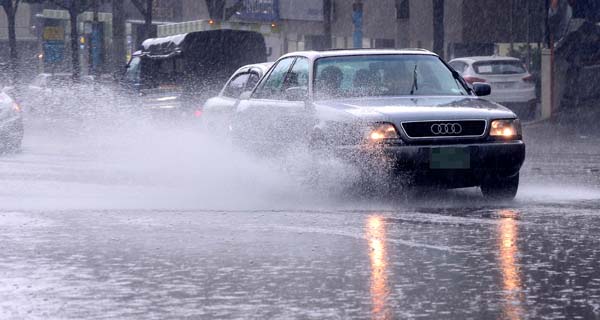 Heavy rain soaked the nation yesterday. Some parts of Seoul saw up to 76.5 millimeters (3.01 inches) of rain during the day with thunderstorms, strong winds and rain. Storms are expected to continue through tomorrow morning.

Pocheon City of Gyeonggi saw the highest precipitation of 150 millimeters as of 3 p.m., prompting the Korea Meteorological Administration to upgrade the rainfall advisory to a warning.

Lightning struck a small laundry plant yesterday at dawn in Pocheon and four people suffered from severe smoke inhalation. They were later transferred to a hospital.

The three other regions under warning included Goyang, Paju and Yangju in Gyeonggi, all of which saw their rain gauges collect more than 80 millimeters throughout the day.

A rainfall warning is issued when the weather agency anticipates more than 110 millimeters of rain to fall within six hours.

Rain submerged five homes in Goyang during the early morning.

The weather forecast agency said that the rain will continue until tomorrow morning, but it won’t be as heavy as it was yesterday.

“We expect 30-70 millimeters of rain in Seoul and most parts of the country [today],” said an official of the agency. “We’ve seen days of heavy rain recently and it will likely weaken the ground. People should be warned of any kind of risk related to the collapse of buildings and other facilities.”

Last Friday, some 200 millimeters of rain in Yeongcheon, North Gyeongsang, caused a landslide, closing an expressway lane bound for Seoul for hours.

The precipitation is expected to cool down today’s temperature in Seoul, capping it below 30 degrees Celsius (86 Fahrenheit), but a hot spell is forecast to hit the country tomorrow through Thursday with the day’s high reaching 30 degrees Celsius.