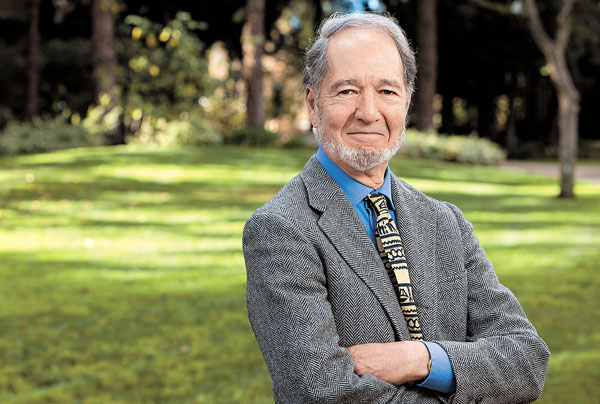 American scientist Jared Mason Diamond, 76, is one of the few scholars who focuses on multidisciplinary studies. His book, “The World Until Yesterday” (2012) was translated into Korean in May. His Pulitzer Prize-winning book, “Guns, Germs, and Steel” (1997) is also popular with Korean readers. Provided by Reed Hutchinson and UCLA

Today, studies are too specialized and subdivided. Multidisciplinary studies are more easily said than done. Jared Mason Diamond, 76, is one of the few scholars who focuses on multidisciplinary studies. The American scientist, who is now working as a geography professor at the University of California, Los Angeles, crosses borders between biology, linguistics, history, anthropology and geology.

Diamond, author of “The World Until Yesterday,” (2012) is well-known to the Korean public. His Pulitzer Prize-winning book, “Guns, Germs, and Steel” (1997), was translated into Korean in May and hit the best-seller list in the last half of last year and the first half of this year after Seoul National University said it was the most borrowed book in its library last year.

Diamond also ranked 12th on the U.K. monthly magazine Prospect’s poll of world thinkers earlier this year. The JoongAng Sunday had an e-mail interview with him last month. Here are some excerpts:

Q. When broadly defined, geography encompasses everything from politics to the economy and more. Is this the narrowest possible definition and understanding of geography as it influences human lives? 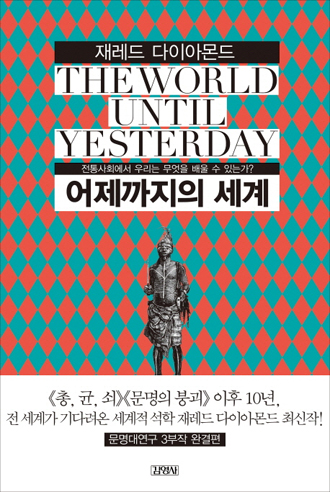 The cover of “The World Until Yesterday,” translated into Korean. Provided by the publisher, Gimm-Young

A. I would broadly define geography as the science of everything connected to “place” on Earth: biogeography (the distributions of plants and animals), physical geography (rivers and coasts and mountains), and of course human geography (e.g., a major part of the explanation for why South Korea developed agriculture and state government and writing earlier, and is richer today than Paraguay and Malawi).

Is geography of culture and religion more important than economic geography?

Asking whether geography of culture and religion is more important than economic geography is like asking what is the most important vision for a happy marriage: agreement about sex, money, religion, children, or politics. When you hear someone ask that question, your know that they are likely to end up divorced, because a happy marriage requires considering all of those variables and not asking which one is more important than the others.

Similarly, the geography of culture, religion, economics, climate, biogeography, and physical geography are all important: one can’t hope to understand human societies without considering all of those features, just as one can’t hope to enjoy a happy marriage if one thinks about sex alone.

Powerful political units - empires of Macedonia, Mongols, Muslims, etc. - appear to rise suddenly, whereas they tend to decline slowly. Is it because leadership matters the most in the rising stage, while environmental factors are more determinant in the declining stage? How is leadership influenced by geography?

I think that it’s untrue that powerful political units tend to rise quickly but decline slowly. That’s true in some cases, but not in others: the Inca Empire, Carthage and the British Empire all rose slowly but declined suddenly. As for the influence of geography on leadership, the exercise of leadership is constrained by geography: even a great leader can’t accomplish much if geography makes his or her country weak. Whoever heard of the great leaders of Paraguay and of Malawi?

Which would be truer? The 21st century as the Asian century or as the Asia-Pacific century?

Neither is true. While quite a few Asian countries that were formerly poor are growing in wealth and power, North America and Europe still enjoy fundamental geographic advantages which will not disappear during the 21st century.

Neither a conflict between China and the U.S., nor a conflict between any country and any other country, is inevitable considering human genetic makeup or other reasons. Throughout the thousands of years of recorded history, relations between political units have always been characterized by a fluctuating mixture of conflict and friendly relations. Conflicts arise through calculated plans and though blunders, not through genetic makeup.

Eurasia versus the rest as a unit of analysis may be too large. However, it can be more revealing than the “West versus the rest” dimension. Is it possible to focus on the rest without referring to the dominant?

Two separate questions are involved, at two geographic scales. One important question is Eurasia versus other continents: why was it that some people of Eurasia, rather than of some other continent, were the ones to conquer most of the rest of the world?

My book, “Guns, Germs, and Steel” discussed the answer. There is a second question, the one that you ask, not closely related to that first question: within Eurasia, why was it Europe rather than China or India or the Mideast that expanded around the world? The answer to that second question remains a matter of debate; I briefly suggested my own theory of the answer in the epilogue to my book.

Korea appears to be both cursed and blessed by geography. What is the closest equivalent to the Korean case that Korean people should study?

Several things make Korean geography a distinctive curse and blessing: location in the temperate zones (a blessing), proximity to two more populous and powerful countries (China and Japan; sometimes a blessing and sometimes a curse), and a peninsular shape (an important fact, rather than a curse or blessing).

Does “global village” mean the “end of geography”?

No, “global village” does not mean the “end of geography.” Even while globalization continues, Korea will continue to be a peninsula in the temperate zones, close to China and Japan, speaking the Korean language, and writing in your wonderful Hangul alphabet.

What do you think of North Korean nuclear weapons?

I think that they are bad, just as any powerful weapons in the hands of any crazy leaders have always been bad.

Should Korean readers read your books in the order of their publication dates?

What should Korean readers focus on as they read “The World Until Yesterday?”

As Korean readers read my new book, they will discover how fascinating traditional societies are, and what useful lessons for their own lives modern Koreans can learn from traditional peoples.

In social sciences, too many variables as well as too few variables seems to be bad. Is three the optimum number?

There isn’t any optimal number: it depends upon the question asked and on one’s target audience.