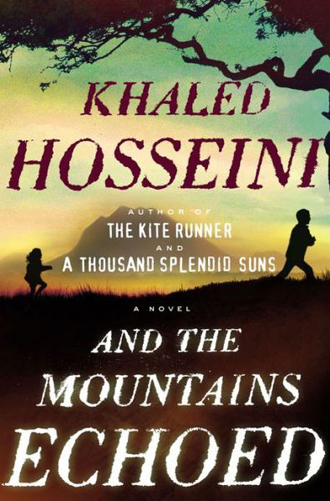 Khaled Hosseini’s first novel in six years echoes the themes of family relationships explored in his previous novels, but the multigenerational saga weaves together more characters and locales than the author has tackled previously.

Anchored by the story of two young siblings separated in early 1950s Afghanistan, “And the Mountains Echoed” features a patchwork of characters navigating familial relationships, histories and obligations over the next half-century in places ranging from Greece to Paris to Northern California.

Hosseini, who was born in Kabul and has lived in Northern California since 1980, is also the author of the best-selling novels “The Kite Runner” and “A Thousand Splendid Suns,” both set in Afghanistan.

“I had more or less kept Afghanistan as the home base for my previous two books, but I did want to write about different parts of the world as well and expand the social milieu of my characters and their cultural backgrounds,” Hosseini, 48, said.

The broader scope of “And the Mountains Echoed,” published by Riverhead Books, has drawn praise as well as readers since its release in late May. Riverhead is a division of Penguin Group USA, which is co-owned by Bertelsmann and Pearson PLC,

The book holds the No. 3 spot on the New York Times best-seller list for print and e-book fiction.

Among the book’s characters are an Afghan socialite who flees to Paris to become a successful yet troubled poet, a doctor whose childhood on a Greek island leads him to a job in a Kabul hospital, and a wealthy pair of brothers trying to reconcile their family history in Afghanistan with their suburban lives in California.

Hosseini said he wrote each character’s story separately, but strived to connect them all to the original pair of young siblings, which he wrote first.

“It was a matter of remembering that these other characters were simply branches that had come off the main tree trunk, which was the story between the two children at the very outset of the book,” he said. “Each chapter reveals something about something you’ve read previously.”

Though the characters’ lives unfold on different continents and often in different decades, many wrestle with the rewards and sacrifices of sibling relationships.

“All sibling relationships are fascinating because inside them there’s this push and pull ... It’s a relationship that’s full of conflict,” said Hosseini, who is the oldest of five children. “People who absolutely love each other can also be terribly cruel to each other.”

While these dynamics persist across generations and cultures, he noted that there are different approaches to family in the United States than in Afghanistan, where he spent much of his childhood.

“In the U.S., we feel at our most natural when we’re alone. We have something called downtime where we can be by ourselves and unwind,” he said.

“It’s kind of the opposite of the way I was raised, which was downtime was when you had 15 people sitting around - cousins, aunts, uncles.” Reuters

And the Mountains Echoed