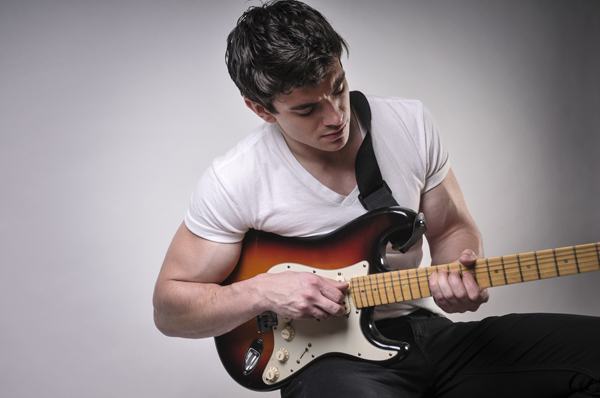 LOS ANGELES - He’s a musician without a record label, a card holder without any remaining credit. And the gig that supplies what he calls “food money” may now be in jeopardy.

But after events of the last week, Steve Grand said “I would die a happy man today,” and not for the reasons he’s suddenly getting attention.

Grand’s first music video, for his country-tinged rock ballad “All-American Boy,” was posted on YouTube on July 2. By last night, it had exploded, attracting more than 400,000 total views - nothing for top-charting videos from big-name recording artists, but an impressive figure for one from a complete unknown whose only promotion has been internet buzz.

The video cost just $7,000, a fraction of the major-names’ going rate, but it was a fortune to Grand, who came up with the entire budget himself by maxing out his only plastic to tell the video’s story.

“All-American Boy” portrays a young gay man who misreads signals from an apparently straight “all-American” male friend. On a day hanging out with the gang, the two guys and a girl take off in a car. She drives, as the guys sit together in the back, with the straight man, at one point, falling asleep on the gay man’s shoulder. Feeling like a third wheel, the girl eventually, angrily drives off, leaving the two men to pal around in the woods, where they end up stripping down and going skinny-dipping - even sharing a quick kiss. Ultimately for the straight guy, it was just all in good fun. But for the gay man, it was something much more significant, and he is left dazed, confused and longing.

The story was inspired by one of Grand’s own.

“I was a 13-year-old boy (at camp),” noted the 23-year-old singer-songwriter, speaking by phone from his hometown Chicago. “One of my counselors was warm and strong and he took an interest in me - not sexually, but as a friend, and it really moved me. I remember leaving with a horrible ache in my heart.”

While “All-American Boy” is told from the gay man’s perspective, Grand said he knew its tale of unrequited love would resonate across lines of sexuality. He’s received hundreds of postings on YouTube, Twitter and Facebook from viewers, both straight and gay, saying they understand such rejection and heartache.

Grand said that upon discovering he was gay in eighth grade, he told friends, which quickly got back to his parents. They insisted he go to so-called “straight therapy,” which he endured for five years. It didn’t work.

He logged his full freshman year at Belmont University in Nashville, but, due to the costs, returned to Chicago. His recent employment has run the gamut from modeling to supplying music for Catholic church events, the latter being what he called the “food-money” gig.

Grand said he has no idea where the YouTube success may take him, though he does admit he’s “not much of a singer” and more of a songwriter. “Of course, I want to continue to grow as a man and grow as an artist,” he commented.

For now, Grand appears happy just being the moment, immersed in all those postings. “Just the hundreds of people who have said, ‘Your story is my story. Thank you for this,’ is enough for me.”

“Like I said, I would die a happy man today,” Grand continued. “And it’s the first time in my entire life I can say that.” AP