Murray hungry for more titles, not No. 1 ranking

Murray hungry for more titles, not No. 1 ranking 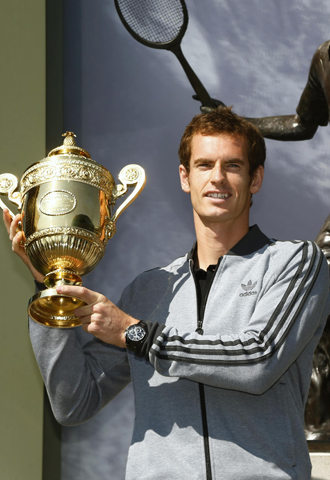 LONDON - Andy Murray won Wimbledon, of course, the first British man in 77 years to do it. He won last year’s U.S. Open, too. And an Olympic gold medal.

Yet he still sits at No. 2 in the ATP rankings.

That’s all fine by him.

A day after his historic victory at the All England Club, Murray said he is far more interested in winning additional Grand Slam titles than reaching No. 1. He has played in the finals of the last four major tournaments he entered.

Asked Monday if moving up to the top spot is his next goal, Murray replied: “I don’t know. It’s a tough one for me, because right now I’ve won two Slams and .?.?. and [won] the Olympic gold, and I’m nowhere near being No. 1. I don’t know exactly why that is.”

He noted that perhaps he needs “to be more consistent in the other events,” and is aware that skipping this year’s French Open because of a bad back did not help his ranking points.

But Murray added that he’d be OK with never reaching No. 1.

“I would rather not get to No. 1 and win more Grand Slams,” he said, “than never win another Grand Slam and get to No. 1. I’d rather try to win more Slams.”

He narrowed the gap in the standings but still trails top-ranked Novak Djokovic, the man Murray beat, 6-4, 7-5, 6-4 for the championship Sunday. The last British man to win Wimbledon was Fred Perry in 1936. On Monday, Murray awoke after about an hour or so of sleep to fulfill media obligations, including posing for photos near the statue of Perry that stands outside Centre Court.

Pictures of Murray graced the front pages of British newspapers Monday, and there’s already buzz building about whether he will be granted knighthood.

Murray was asked Monday what he thinks about that.

“I don’t really know,” he said, sighing and resting his chin on his left hand. “I mean, it’s a nice thing to have, or be offered. I think just because everyone’s waited for such a long, long time for this - that’s probably why it would be suggested, but I don’t know if it merits that.”

So far this season, he is 34-5 with four titles, second on tour to Rafael Nadal’s seven.

There is one more Grand Slam tournament remaining in 2013, the U.S. Open, and for the second year in a row, the first three major titles were divided by three men. This year, Djokovic won the Australian Open (beating Murray in the final), Nadal won the French Open, and Murray put his name on the list Sunday.

It sets up an intriguing hard-court stretch now, leading to Flushing Meadows, where play will begin Aug. 26, with Murray as the reigning champion. AP