IT trade turns in a record first half

IT trade turns in a record first half 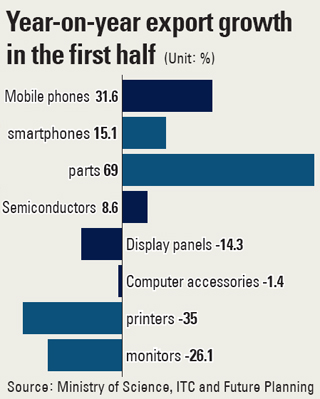 Korea posted a record IT-related trade surplus in the first half of $42 billion and the biggest contributors were mobile phones and semiconductors, the Ministry of Science, ICT and Future Planning said yesterday.

That is 2.1 times the nation’s trade surplus of $19.55 billion in the same period. Tech product export volume in the first six months of the year was $81.24 billion, up 10.9 percent from the same period a year earlier.

Mobile phones and semiconductors led the IT growth. Korea exported $11.64 billion won worth of mobile handsets, 31.6 percent more than last year. Smartphones shipped abroad also climbed 15.1 percent year-on-year. Samsung Electronics retained its position as the world’s top smartphone maker for five straight quarters through the first half, and LG Electronics became the third-largest player during the half that ended June 30. Combined, the two manufacturers have a 38 percent global market share.

Semiconductor exports in the first half picked up 8.6 percent to $26.45 billion on the back of rising demand for memory chips and system semiconductors.

Computer-related products, on the other hand, saw overseas shipments decline by 1.2 percent to $3.63 billion. Culprits were double-digit decreases in exports of printers (35 percent) and monitors (25.1 percent) amid the faltering global economy and rising portion of such products made in countries with cheaper labor, according to the ministry.

By region, tech-goods exports increased 32.9 percent to the 10 ASEAN countries, 14.2 percent to the United States, 10.2 percent to China and 2.2 percent to the European Union. However, exports to Japan retreated as the yen continued its weakness and the country decreased its imports of chips and smartphones.

Korea’s imports of IT-related products in the first half grew 3.3 percent year-on year. More chips and mobile phones were brought into the country, while fewer flat displays, computers and computer accessories were imported, a trend similar to exports.

Despite aggravated conditions in the global IT industry expected during the second half of the year, the ministry forecasts IT exports will reach a record $160 billion for 2013.

The ministry predicts that semiconductors will sustain their export momentum as Korean players - Samsung Electronics and SK Hynix, the world’s two top makers of computer memory chips - have solid standing and the supply of their competitors, including the bankrupt Japanese chipmaker Elpida Memory, is expected to shrink.

Smartphone shipments overseas are expected to post double-digit growth from July through December as makers come up with new products and demand from emerging markets for smartphones is likely to pick up.

“Fears of a sluggish economy in China, the United States’ earlier-than-expected exit from its quantitative easing program and the still looming sovereign-debt crisis in Europe, added to emergence of Chinese IT powerhouses may have a negative impact in the second half,” the ministry warned.