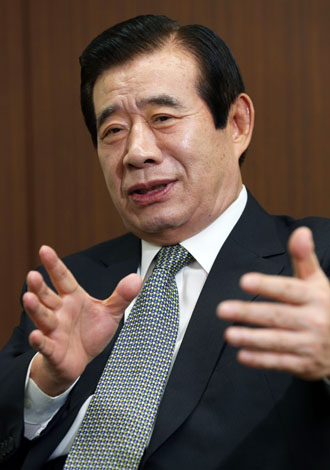 Han Gwang-ok, the 71-year-old politician who heads President Park Geun-hye’s campaign for national unity, is often called a living Buddha. He has been a witness to Korea’s turbulent political times and a successful negotiator who managed to conclude deals many would have considered impossible.

In 1997, he concluded the negotiations between Kim Dae-jung and Kim Jong-pil to merge their presidential bids, leading to Kim Dae-jung running and winning on a unified ticket. A key associate of the late president, he also led the political reform negotiations of Kim’s political party, a successor to the Democratic Party, to introduce a nationwide presidential primary in 2002. At the time, Han was also called “zipper” because he was so tight-lipped.

“In a negotiation, what you need the most is putting yourself in your rival’s shoes and finding out what he wants,” Han said. “The second is broad-mindedness, and the third is patience.”

Han tells his associates often that he believes one step by one hundred people is more powerful than a hundred steps by one person. “Making a hundred people take a step is unity,” he said. “And there is no need to say that you need patience to this end.”

Maybe that is why President Park chose the veteran politician from Jeonju, North Jeolla province, who once led a group of lawmakers who were rivals of the Saenuri Party, to lead her “Grand National Unity” campaign. Han, who served as Kim Dae-jung Blue House chief of staff from 1999 to 2001, was recruited by her campaign in October last year and Park formally appointed him on Monday as the inaugural chairman of the Presidential Committee on National Cohesion.

At the ceremony, Han briefed Park that his committee’s three goals will be overcoming social conflict and historical disputes, creating and implementing national values that can unite the people and promoting the culture of co-existence, cooperation and communication. Following the ceremony, he sat down for an interview with the Joong-Ang Ilbo and stressed that the committee will serve as the infrastructure for unification.

Han was elected a lawmaker for the first time in 1981 and reelected three more times since then. The former four-term lawmaker was a longtime confident of the late President Kim, and began serving him in 1988 as his chief of staff when he was the opposition leader. After Kim’s presidential victory, Han served as his presidential chief of staff and the head of the tripartite commission of the government, labor unions and employers. In 2001, Han also served as the chairman of Kim’s Millennium Democratic Party, which later became the Democratic Party.

“We have experienced an extremely condensed period of industrialization and democratization,” Han said. “It is no wonder that society’s conflicts and disputes have deepened. But without achieving the grand unity of the people, we cannot truly become an advanced country.”

Han said unifying Koreans may seem to be a difficult task, but he is more than willing to tackle the challenge. “Those who think about history actively have advanced history,” he said.

Although Park asked Han to support her campaign to promote the “Grand National Unity” initiative as one of her major pledges, the presidential committee was only launched this week, months after her inauguration in February. Although the committee can have up to 40 members, only 18 have been appointed so far.

“Until now, there were various unexpected developments, and Park also visited the United States and China,” Han said. “And it took time to find the influential leaders and best experts to create the committee. Many said the committee was undersized because we only picked 18 members, instead of the maximum 40, but I don’t think the larger number means more projects. Although it is the committee of the very best few, there is nothing stopping us becoming a strong committee.”

Asked about the criticism that Park’s appointments to the Blue House and government lacked balance to overcome the deeply-rooted regionalism of Korea, Han defended her decisions.

“Of course, there were some shortcomings at the beginning,” he said. “But I have served as the presidential chief of staff in the past. You have to think about using the right person for the right position and regional balance at the same time, but I think it is more important to focus on using the right person for the right job. I see fewer and fewer problems associated with regional imbalance and school ties than we have witnessed from the past. The president is selflessly making appointments.”

Han, who promoted a strong engagement policy toward North Korea when he served under Kim Dae-jung, said he wants to contribute to the two Koreas’ unification.

“I think it is hard for us to talk to the North one-on-one because of its peculiar nature. President Park won the support of the United States for her trust-building policy with North Korea and also did so in China. There is no way for the North not to be conscious about that. From now on, we must work to win the support of our neighbors and then open up the North.”

Han said he decided to support Park, despite his four-decade political career working on the opposite end of the spectrum, because of his sense of loyalty for the country. “When your country is in a crisis, you have to think about who should be the leader,” Han said. “Who has the higher chance to win the election or not wasn’t really an issue for me.”

Among the three major players of the December election - Park, Moon Jae-in of the Democratic Party and independent Ahn Cheol-soo - Han said he thought Park was the most capable leader.

“When I first met her, she was extremely humble,” Han said. “It was hard for me to understand why the people said she is hard to connect with. My wife also talked to President Park on the phone a couple times, and she said she also felt the same.”

Han quit politics in 2010 to attend to his wife, who received treatment for lung cancer. “She has recovered her health,” Han said. “We strolled in nature whenever I had time. Now that the presidential committee has launched, I will become busy and won’t have as much time as I used to. Throughout my political career, I felt indebted to her.”