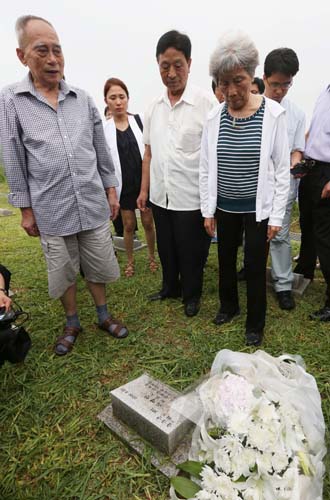 Three Chinese veterans who fought on the North’s side in the Korean War pay tribute yesterday to fallen comrades buried in Paju, Gyeonggi, in a cemetery for North Koreans and Chinese. They are (from left) 85-year-old Lai Xuexian, 78-year-old Liang Denggao and 81-year-old Chen Ruobi. By Kim Kyung-bin

PAJU, Gyeonggi - Three elderly Chinese - two men and a woman - came to this city yesterday to burn incense and pay their respects to fallen soldiers of the Korean War (1950-53).

The soldiers they honored fought on their side of the war - the North Korean side.

Chen Ruobi, 81, Lai Xuexian, 85 and 78-year-old Liang Denggao all served in the Chinese army, which fought for North Korea during the war. They stroked tombstones of their comrades who died some six decades ago.

The sky was overcast and gray following a shower marking the summer monsoon season.

There are 362 Chinese soldiers and 718 North Korean soldiers buried in the Cemetery for North Korean and Chinese Soldiers in Paju, which opened in 1996.

Upon the invitation of the Seoul-based Korea-China Cultural Association, the three veterans arrived in Seoul yesterday for a three-day trip which will include a visit to the War Memorial of Korea in Yongsan District, central Seoul, as well as a chance to visit key landmarks in the city.

It is the first time Chinese war veterans who fought on the opposite side of the Korean War were invited to visit the cemetery and other war memorial sites in South Korea.

“I am thankful to the South Koreans on behalf of the Chinese soldiers buried here,” said Chen, who served as a female statistical officer during the war.

“The June 25 [war] is a war that should not have happened. I hope Korea can be reunified and peace can quickly be reached.” The war started with North Korea’s invasion on June 25, 1950.

“I know that recently President Park Geun-hye proposed the repatriating of the Chinese soldiers’ remains,” said Chen. “I am glad of this and it is a great gesture.”

At a summit in Beijing last month, President Park offered to send back the remains of some 360 Chinese soldiers buried in Paju as a gesture of friendship to mark the 60th anniversary of the armistice ending the Korean War.

The visiting Chinese veterans are from Chengdu, Sichuan, in southwestern China. They joined the war as soldiers barely 20 years old.

The veterans were able to enjoy the view from the Odu Mountain Unification Observatory in Paju, near the demilitarized zone separating the North from the South.

They also met with six South Korean war veterans at Imjin River, the location of a major battle during the Korean War, which took place in April 1951.

Around 180,000 Chinese soldiers were killed during the Korean War.

The three were accompanied by Chinese and Japanese media recording the friendly dialogue between veterans from opposite sides.

The Chinese veterans said they were “moved” by their trip.

“I felt a sense of fraternity with the Korean citizens for making and maintaining a cemetery for the Chinese soldiers,” said Liang, who served as a signalman during the war. “In the future, I hope Korea and China can continue to maintain and develop good relations.”