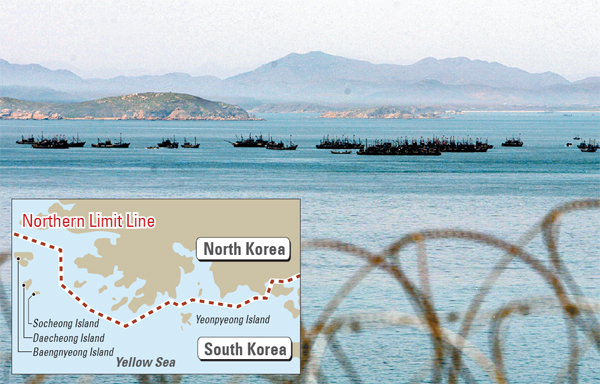 A file photo of Chinese boats illegally fishing below the Northern Limit Line in South Korean waters. The South Korean Navy chief will discuss the sensitive diplomatic issue of illegal fishing by Chinese vessels near the disputed western sea border on an official visit to China this week. [JoongAng Ilbo]

Admiral Choi Yoon-hee, chief of naval operations of South Korea, made a four-day trip to China starting yesterday to meet top Chinese military officials and discuss how to build up cooperation and military interactions between the two countries, a press release by Seoul’s Ministry of National Defense said yesterday.

Choi was invited by the Chinese Navy as part of the so-called “strategic, cooperative partnership” established in 2008.

Choi will meet with his counterpart Wu Shengli, commander-in-chief of the People’s Liberation Army Navy, tomorrow in Beijing and raise the matter of the Chinese fishing vessels illegally working in South Korean waters near the so-called Northern Limit Line, the de facto maritime border with North Korea in the Yellow Sea.

Despite recent military tensions between the two Koreas over the past months, some Chinese fishermen hover above the NLL, particularly during the spring and summer crabbing seasons. They sneak across the NLL and sail off when South Korea’s Coast Guard appears.

The issue became a source of diplomatic friction between South Korea and China when a Chinese fisherman was shot dead by a Korean Coast Guard officer in October 2012 after a violent resistance to their raid.

According to the Defense Ministry, Choi will ask Wu to control the Chinese vessels to prevent “accidental clashes” between the Korean military and the fishermen.

“Basically, Choi will appeal that our Navy had difficulties patrolling the NLL because of the illegal fishing by the Chinese boats,” a Korean Navy official told the Korea JoongAng Daily by phone. “He will also point out the possibility of further clashes between the Korean Coast Guard and the fishermen.”

Choi visited a Chinese naval unit in Shanghai yesterday. His schedule on Wednesday was not revealed to the public.

The meeting of the two Navy heads will also deal with a variety of plans to develop bilateral cooperation.

Choi will propose an annual naval-level meeting between the two navies and a joint system of sharing military information.

Following the meeting with Wu, Choi will meet with Chinese Defense Minister Chang Wanquan tomorrow and exchange opinions on the current security and military situation in Northeast Asia.

On Friday, he will move to Qingdao to meet with Vice Admiral Tian Zhong, commander of the north sea fleet of the Chinese navy, and discuss how to increase communication between the navies through military hotlines and develop interactions between China’s North Sea Fleet and South Korea’s Second Fleet.

During his visit to Qingdao, China will show its cutting-edge submarines and frigates to Choi, the first time it will do so for a Korean visitor.