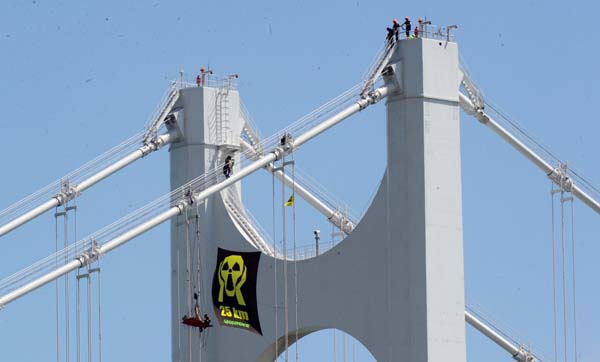 Greenpeace activists stage a protest by hanging a banner against nuclear power plants on Gwangan Bridge in Busan yesterday. [NEWSIS]

The investigation into the corruption-stricken nuclear energy industry is poised to reach the country’s conglomerates with the new evidence found from a prosecutorial raid of the home of a senior official at the Korea Hydro and Nuclear Power Corporation.

It has been reported that the prosecutors discovered from their raid targeting the senior official at the power corporation, surnamed Song, who has since been indicted, that major conglomerates were involved in the graft scandal.

The prosecutors reportedly found evidence in the raid that Song had received a total of 720 million won ($631,856) in kickbacks for influence peddling from nuclear power companies, including conglomerates. Prosecutors reportedly believe that the troubled official received bribes as he was in charge of selecting which companies’ nuclear reactor parts to purchase.

“We are not ruling out the possibility that some of the bribed money was handed over not only to top officials at the power corporation but also influential figures in the political arena and government offices related to the nuclear industry,” said a prosecutor involved in the case, speaking on the condition of anonymity.

To meet the growing cases of newly-discovered bribery and irregularities in the nuclear power industry, the Supreme Prosecutors’ Office said Monday seven district prosecutors’ offices will jointly handle the investigation.

Prior to Monday, the Busan Eastern District Prosecutors’ Office solely led the investigation.

Widening of the investigation followed the recent finding by the nuclear power corporation that quality assurance documents for nearly 300 nuclear plant parts have been fabricated.

“A total of 49 nuclear industry firms are subject to the nationwide investigation. Three district prosecutors’ offices in the capital areas and four regional offices will jointly handle the ongoing special probe,” one prosecutor involved in the case was quoted as saying by the JoongAng Ilbo.

The widening of the investigation came after a Busan court’s acceptance of an arrest warrant Sunday for Kim Jong-shin, former chief of the Korea Hydro and Nuclear Power Corporation, for allegedly receiving 100 million won in bribes from a nuclear plant company in return for business favors using his top post at the corporation.

With the court’s acceptance of the warrant, the ongoing investigation into the corruption scandal in the nuclear industry is expected to reach top officials at the power company.

The Busan Eastern District Court cited the possibility of Kim destroying evidence or fleeing to evade charges regarding why it accepted the request.

The 68-year-old Kim, who was appointed to the position at the state-run corporation by former President Roh Moo-hyun in 2007 and headed the corporation until May last year, is accused by the prosecutors of pocketing 100 million won from the corporation’s contractor in charge of managing nuclear plant water management.

The prosecutors reportedly obtained testimony from the contractor’s official that he had bribed Kim for influence peddling.

With the arrest of the once-respected nuclear-energy expert, the investigation into the rampant graft practice in the nuclear industry is set to reach the top echelon of the state-run corporation, and prosecutors are also eyeing the possibility that influential figures in politics and government offices related to the nuclear industry will be implicated in the scandal.

On the ongoing investigation into the nuclear power industry, President Park Geun-hye called for a thorough probe to uncover illegal practices by those in the industry during the cabinet meeting yesterday.

“With a thorough prosecutorial investigation and a special audit by the Board of Audit and Inspection, [the government] should present to the public the detailed results of the probe .?.?. [By getting to the bottom of the corruption scandal in the nuclear energy industry], we should present a chance for the industry to be reborn again [as a transparent sector],” said Park.

A senior official said Park was determined to fundamentally improve the oversight on the nuclear plant industry.

“Under the International Atomic Energy Agency’s instruction, promotion and regulation of the nuclear plant industry must be separated,” said the official.

“In Korea, the functions were scattered among various ministries and they passed the buck to one another. Then a blind spot was created, causing many problems.”

“What Park specifically addressed during the cabinet meeting about the nuclear power industry is an important order,” he said.

While the Board of Audit and Inspection, prosecution, Korea Hydro and Nuclear Power Corporation and Nuclear Safety and Security Commission must perform their original roles, Park wants the Ministry of Trade, Industry and Energy to play a key role to create guidelines for each office’s close cooperation and strengthen oversight.