Hong a no-show over Jinju hospital

Hong a no-show over Jinju hospital 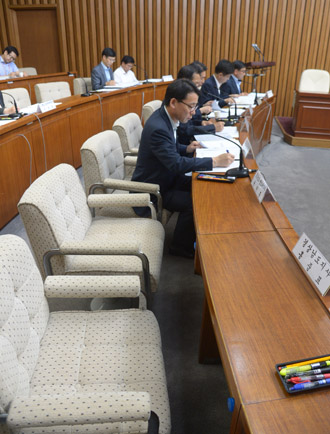 South Gyeongsang Governor Hong Joon-pyo did not show up yesterday at a hearing by the National Assembly’s special committee to investigate the provincial government’s decision to shut down Jinju Medical Center. [NEWSIS]

The National Assembly yesterday approved a subpoena ordering the governor of South Gyeongsang to appear at an investigative hearing on the controversial shutdown of a provincial health clinic.

The special committee to investigate the provincial government’s decision to shut down the Jinju Medical Center had already summoned Governor Hong Joon-pyo - who had refused to testify before lawmakers - and seven other provincial officials to testify yesterday, but they didn’t show.

With their failure to appear, angry committee lawmakers from both ruling and opposition parties decided to issue the order to testify. According to the order, Hong must appear before the special committee by 4 p.m. today.

After five months of debate, the South Gyeongsang provincial government closed the money-losing hospital, the nation’s second-oldest public hospital. Hong, a political heavyweight in the Saenuri Party, said the shutdown was unavoidable due to snowballing losses.

The decision was opposed by civic groups, medical workers and the opposition Democratic Party, and a National Assembly special investigation decided to evaluate the closure of the 103-year-old medical center.

Instead of appearing to testify yesterday, Hong and other witnesses submitted a written statement to Chairman Chung Woo-taik of the special committee, also a Saenuri lawmaker.

In the statement, they argued it is unconstitutional for the legislature to investigate the decision to shut it down because the provincial government has sole authority to decide the hospital’s fate, regardless of the fact that state money was spent to build the medical center.