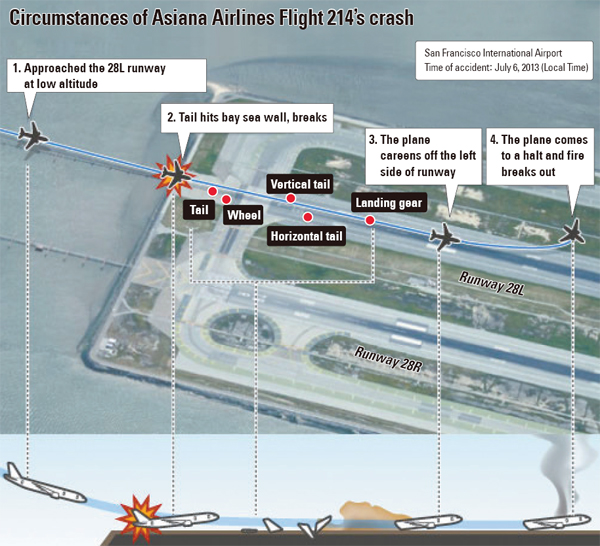 Three seconds before Asiana Airlines Flight 214 crashed on a San Francisco Airport runway on Saturday U.S. time, the speed of the jetliner was 34 knots lower than the target speed of 137 knots (157.7 miles per hour), the National Transportation Safety Board (NTSB) investigating the accident said yesterday.

At 125 feet, about eight seconds before the crash, the jetliner’s auto throttle, a system that guides a plane to fly at an appropriate speed during landing, began operating, she said. The lowest speed was 103 knots, measured about three seconds before impact.

On Saturday around 11:30 a.m., Asiana’s Boeing 777 traveling from Incheon International Airport to San Francisco with 307 passengers and crew members crashed after the tail section of the plane hit the runway, killing two Chinese girls aged 16 and 17 and injuring at least 182 others. 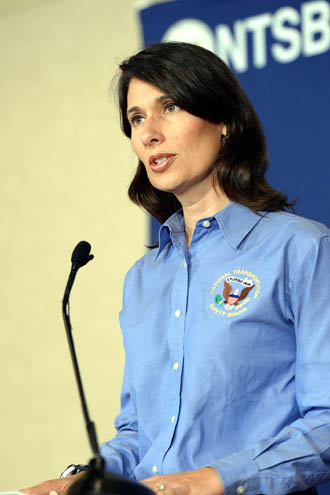 On Sunday, the NTSB said they had recovered the flight data recorder (FDR), or black box, from the cockpit and saw that the pilots attempted to abort the landing about 1.5 seconds before impact and tried to gain altitude in a hurry.

In the last two press briefings held in two days, the NTSB authority implied that pilot error was the likely cause of the crash, by stating that the possibility was very low that the crash occurred due to the jetliner’s technical defects or the switched-off “glide slope” of the 28L runway, a system meant to help planes land. “We are currently focusing on questioning the pilots,” Hersman said during yesterday’s briefing.

But Ministry of Land, Infrastructure and Transport said it normally takes more than a month to check every possible technical defect on engines that are composed of thousands of components, and it is too soon to draw such conclusions.

“The low speed the NTSB released yesterday is objective data, but it doesn’t tell us why the plane came in that slow,” a spokesman of the ministry said.

“I don’t understand why the NTSB only discussed seven seconds of FDR records, which only showed that the pilots were in a hurry to abort the landing,” aeronautical engineering professor Shin Sang-jun of Seoul National University told the JoongAng Ilbo.

“The FDR includes the last two hours of flight records that recorded the entire communication or information the pilots had exchanged with the airport’s control tower before the crash, but they only opened the last seven to eight seconds of it in the first day and have been releasing a series of statements that could make the public think the reason [behind the crash] was pilot error.”

Ministry sources said the pilots claim they tried to boost the aircraft’s airspeed seven to eight seconds prior to the crash, but that the plane’s engines did not respond well enough. The NTSB said on Sunday that a command to “increase speed” by one of the pilots was recorded by the FDR.

The ministry said the four pilots of the flight including Lee Gang-guk and Lee Jeong-min, who were in charge of landing, and Lee Jong-joo and Bong Dong-won, who were also in the cockpit, have been questioned both in person and in writing by the NTSB since Monday.