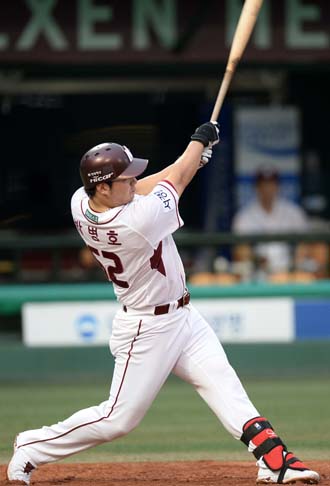 The 2012 MVP of the Korea Baseball Organization, Park Byung-ho of the Nexen Heroes, will make his All-Star Game debut next week.

The KBO yesterday announced the 24-man managers’ pick for the July 19 exhibition game, including Park, who lost to Kim Yong-eui of the LG Twins in the fan vote for Western League first baseman.

Park, who turned professional with the LG Twins in 2005, has been at the top of his game since last year. The 27-year-old was voted the Most Valuable Player of the 2012 KBO season with 73 of 91 votes cast by the KBO-registered press corps last November, after he led the league with 31 home runs, 105 RBIs and a .561 slugging percentage.

Park played every game in the 133-game season last year and has kept the pace up this year so far, having played all 71 games as of Tuesday.

He has the most RBIs this season 61 and is tied with Choi Jeong of the SK Wyverns for home run leader with 17 homers. His batting average, .318, is sixth highest.

Twelve more players from the 24 managers’ picks will make their first All-Star appearance this year, including three players with the new team NC Dinos, including Charlie Shirek, Lee Jae-hak and Na Sung-bum. The Eastern League choices, picked by manager Ryu Joong-il, also include first-timers such as Chris Seddon of the SK Wyverns and Kim Sung-bae of the Lotte Giants.

Including the fan picks, the Twins fielded the most All-Star players this season with 11 players, followed by the Giants with seven and the Bears with six.