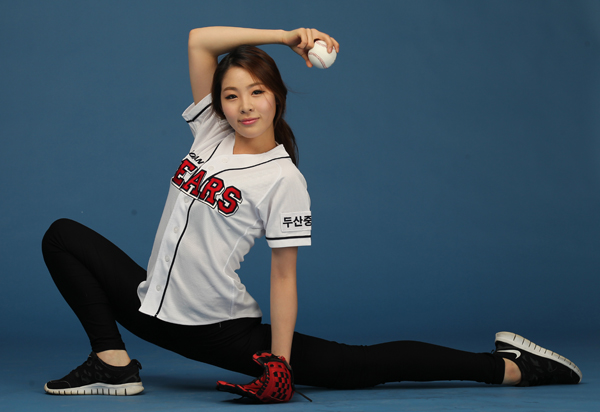 Shin Soo-ji may have been Korea’s first rhythmic gymnast to compete in the Olympics, but she never received much attention from the public. After tearing an ankle ligament in 2010, Shin disappeared from the sport, but few noticed.

But now everyone is noticing the 22-year-old. And it’s not because of gymnastics, but baseball.

Shin was invited to throw out the ceremonial first pitch at a baseball game between the Doosan Bears and the Samsung Lions on July 5 at Jamsil Stadium. Usually, no big deal, as they happen all the time.

No one, however, has ever thrown a pitch like Shin did. The limber gymnast arched her back, wound up, and then turned her whole body into a 360 degree flip before throwing the ball.

It was an amazing pitch, and soon video of the throw was going viral. International media outlets ran with it. One YouTube link of the video quickly racked up more than 10 million views.

Much of the foreign media has dubbed the pitch a “back illusion pitch,” named after a similar rhythmic gymnastics skill. But Shin takes issue with the name.

It’s just an “illusion,” she told the Ilgan Sports on Tuesday. “If I had done a back illusion, I would have stood with my back toward the catcher after the pitch.”

She should know - Shin performed nine straight back illusions, without a pause, in the qualifying stage at the 2008 Beijing Olympics. 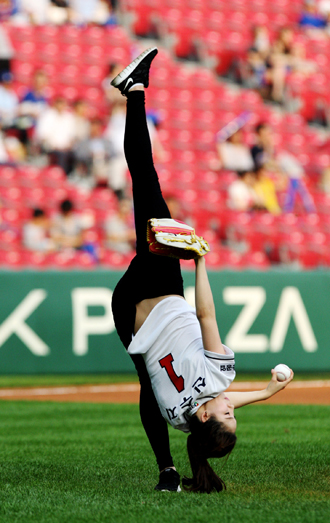 Retired rhythmic gymnast Shin Soo-ji does an “Illusion pitch” before a Korea Baseball Organization game at Jamsil Stadium in Seoul on July 5. Provided by Doosan Bears

Shin’s rise to global recognition was inadvertent. A huge fan of the Bears, she often visited Jamsil Stadium with her friends; eventually Doosan officials noticed her and asked her to throw the ceremonial pitch.

“I am acquainted with Kim Hyun-soo [a Bears outfielder], and he told me that only beautiful women get the chance to throw ceremonial pitches, so I thought I didn’t have a chance,” Shin grinned.

Shin said she practiced hard not to make a mistake.

“To be able to pitch a ball fast, I pitched 80 balls a day during the final week,” Shin said. “I did not know that it would be a sensation like this. I just wanted to live up to the expectations of a rhythmic gymnast.”

Her ball found itself in the catcher’s glove, although Doosan catcher Yang Eui-ji had to stand up to grab it. “I made a strike on eight out of 10 pitches during the practice, so, I am sorry that I couldn’t do it,” she said.

Shin finished 12th at the 2008 Beijing Olympics, her first and only Olympics. Her achievement has since been overshadowed by Son Yeon-jae, 19, who made a fifth place finish at the London Olympics.

“It would have been easy if I had had a person that went before me,” Shin said. “But I think it was meaningful that I was a beginning. The pride of having led a generation of Korea’s rhythmic gymnastics, that gives me great strength.”

She retired last year at the age of 21, which is young even by rhythmic gymnasts’ standards. She tore an ankle ligament in 2010, but even with the injury she competed in the 2010 Guangzhou Asian Games. Only after the Asian Games did she undergo surgery and then suffer through a difficult rehabilitation.

Shin said that she realized the end to her career was near when she underwent the surgery.

“I made up my mind back then if I can’t do this longer, I had better find another path before another day passes,” she recalled.

Her dream now is to become a professor and teach national team athletes. She was admitted to the graduate school of Sejong University to study physical education earlier this year.

“I retired at an age when others are just taking their first step in society. I had no idea of what to do, but now I am having a variety of experiences and I am satisfied,” Shin said.