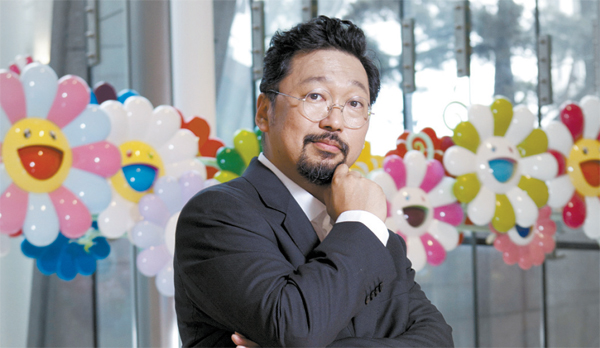 Takashi Murakami is an artist of exciting paradox.

Calling himself “otaku,” a Japanese slang term that refers to an obsessive fan of subculture such as adult comics and animations, he says his works are inspired from the subculture. But his paintings of flowers innocently smiling in cartoon style and his sculptures of girls typically found in Japanese animations with baby faces and voluptuous bodies have been invited to many places of high culture, such as the Chateau de Versailles in 2010.

In addition, these works, made of plastic in flashy colors, often seen on kids’ stationery or in amusement parks, have been selling at high prices to sophisticated collectors such as Francois Pinault.

Perhaps it is because Murakami, 51, set up his own art theory about his works. Under the concept “superflat” that he coined, the artist has combined Japan’s contemporary mass culture images, which are superficial and homogenized, and the country’s traditional art including Ukiyo-e woodblock prints, which look flat compared to old Western paintings intended to show three-dimensional illusion.

“At first, I used the term ‘superflat’ to criticize the shallowness of the post-war Japanese culture,” Murakami said at Plateau, a branch of the Samsung Museum of Art, in central Seoul last week. He was attending the press preview of his first retrospective in Korea, “Takashi in Superflat Wonderland,” which will continue there until early December. 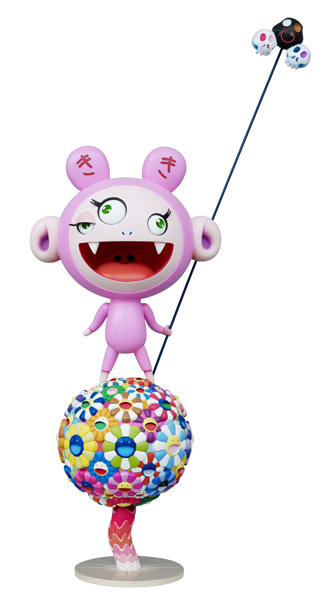 “But, more meanings - not always negative - have been added to the term ‘superflat’ since then,” the artist said.

Regarding it, Ahn So-yeon, chief curator and deputy director of Plateau, said Murakami “has keen insight into the contemporary capitalist cultural milieu, in which the hierarchies between elite culture and subculture as well as art and commodity are flattened.”

Now their sculptures, in flashy colors with playful air, are standing to the left and right sides of Auguste Rodin’s black bronze sculpture, “Gates of Hell,” a permanent exhibit at Plateau, full of serious ambience, to make a strange harmony.

Kaikai and Kiki do not appear only as sculptures and paintings. They appear as heroes of animated films, as stuffed toys and even as so-called “animated stickers” in the mobile messenger Line, which is operated by Korea’s biggest Internet portal, Naver. Line is more popular in Japan than in Korea; Japanese account for 45 million of Line’s 180 million subscribers worldwide.

“I now have great interest in communication through social network services (SNS) including image communication in mobile messengers,” Murakami said. “When I say I am sleepy through an animated sticker, there comes a nuance, depending on which character’s face I use. So, people come to consume more and more character stickers to express nuance in quick communication.”

Kaikai & Kiki Co., Ltd., a company founded by Murakami, deals with many of these businesses. That’s why the artist is often dubbed as the “Japanese Andy Warhol” - not only because he is a pop artist hot in the global art scene, but also because he is doing “business as art.”

Partly due to this, Murakami is not always receiving favorable reviews and he admits it.

“Some people in Japan, especially those who call themselves ‘genuine otaku,’ criticize me for taking only the superficial sides of the subculture, combining it with Western art to produce lies overseas,” Murakami said. “The criticism depresses me sometimes. Still, I try to focus on my goal.”

Regarding the goal, he referred to various things including changing Western-oriented viewpoints in the contemporary art scene with Japanese elements and healing people. 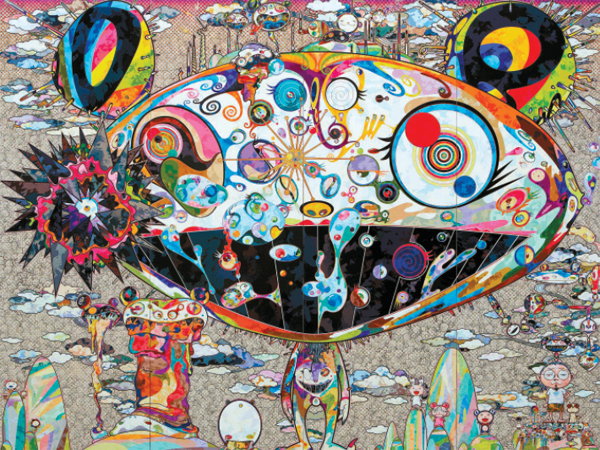 “I have come to think more about the healing effects of art since the disastrous 2011 Tohoku earthquake and tsunami.”

The Korea JoongAng Daily had an interview with Murakami after the press preview. Here are some excerpts.


Q.You are attaching importance to breaking from Western-oriented viewpoints in contemporary art. Still, don’t you think many Westerners take an interest in your works as some kind of Orientalism?

A.Yes. But, for example, Kung Fu movies by Bruce Lee and Jackie Chan were received as eccentric culture in the West at first, but finally contributed to making martial arts common culture in the world. My works of Japanese elements will also help the culture to go beyond the limit of Orientalist taste. 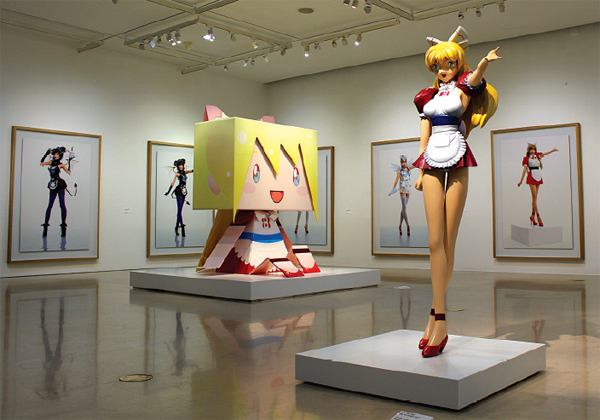 Female viewers sometimes feel uncomfortable about your works of male sexual fantasy, such as the half-naked girl transforming into a fighter plane, now on display at Plateau. What do you think?

Edouard Manet faced harsh public criticism, when he presented his famous “Luncheon on the Grass,” depicting a naked woman picnicking with fully-dressed men. But he just captured a scene of the times.

Sex has both beautiful and ugly sides. As an artist, I spotlight ugly sides. Some people could feel offended but some could feel interested about the new sides. I try to walk on a fine line.

And now Murukami has many female fans. He said during the press conference, “The biggest change I experienced since my collaboration with Louis Vuitton [a French luxury brand], is that I have obtained many female fans. Before, most of my fans were male, as my works are based on otaku culture.”

Your remarks about image communication in SNS were impressive. You think communication through images such as animated stickers can replace text messages? And do you have any plan to make works inspired from SNS?

No, I only say that images and texts supplement each other. I don’t think one is superior than the other.

And, for now, I have no plan to make works about SNS but I am actively using SNS, including Line, to present my works and exhibitions to the public and to communicate with them.

Big eyes in styles of manga (Japanese comics) are characteristics of your works. Even some works such as mushrooms now on display at Plateau have more than two manga eyes. Do those eyes have special meaning to you?

Well, when I first used the motif of the eye, the viewers liked it very much. So I developed it further. I develop my motifs depending on the reactions. And when I was young, I was impressed by a monster with numerous eyes on its body in an animated film. Perhaps, it has influenced me.


The exhibition runs through Dec.8. Admission is 5,000 won for adults. The gallery is open from 10 a.m. to 6 p.m., Tuesday through Sunday and is closed on Monday.