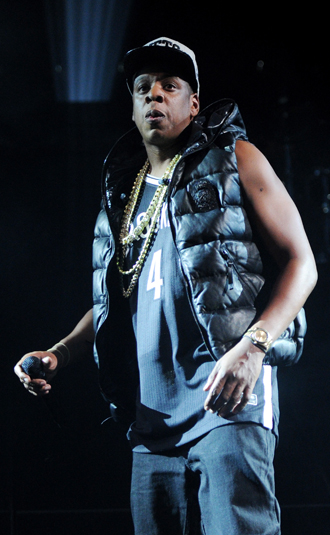 LOS ANGELES - Rapper Jay Z is taking promo to the next level, selling a million copies of his latest album to Samsung for smartphone distribution and going on a six-hour Twitterthon with fans.

The American musician holds the title for most No. 1 albums on the Billboard 200 chart for a solo artist and “Magna Carta .?.?. Holy Grail,” has a good shot of being his 12th record to shoot to No. 1.

But not all critics were impressed with the music and at least one ravaged the Samsung deal.

“Magna Carta,” out on wide release this week, sees Jay Z teaming up with old colleagues such as producers Timbaland and Pharrell Williams, Justin Timberlake on “Holy Grail,” Beyonce on “Part II (On the Run)” and newcomer Grammy-winning artist Frank Ocean on “Oceans.”

Jay Z, 43, spent six hours on Twitter Monday, answering questions from fans about the album, his first since becoming a father to Blue Ivy, his child with wife Beyonce.

He said his favorite track on the album was “Oceans,” which is also the oldest song on the album, having been recorded two years ago. On the track, Jay Z raps about the struggles of his race and his rise to the top.

The American rapper, whose real name is Shawn Carter, is known as an innovator in rap and hip-hop who started out on the streets of Brooklyn in the early 1990s.

Family is the underlying theme in “Magna Carta.” But Jay Z also raps about the frustrations of fame, and praises the finer things in life, on tracks such as “Picasso” and “Tom Ford,” named after the luxury-brand fashion designer.

So far, the album has earned a middling score of 58 out of 100 on review aggregator Metacritic.com. Los Angeles Times reviewer Randall Roberts gave the album three out of four stars, praising the record for being “shimmering, heavy and at times sonically stunning.”

But New York Times’ critic Jon Pareles was less welcoming, criticizing the rapper’s extensive use of designer names and luxury goods in his lyrics. He does give Jay Z credit, however, for songs that “aren’t cocky or neatly resolved.”

“The way it has been presented as a capital-I Important piece of art about ‘duality’ (Jay’s word, not mine), delivered to us via the power of corporate marketing and Samsung-sponsored data-mining, I find absolutely putrid,” Anderson said.

While Billboard will not count the million copies sold to Samsung and offered free to users, the magazine’s chart analyst, Keith Caulfield, wrote on Monday that industry projections suggest the album may sell between 350,000 and 400,000 copies in its first week.

That number would put “Magna Carta” behind Justin Timberlake’s “The 20/20 Experience” which sold 968,000 copies in its first week in March, but ahead of the second-best album debut this year, Daft Punk’s “Random Access Memories,” which sold 339,000 copies in May. Reuters