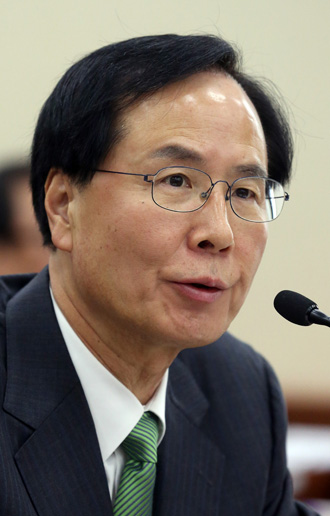 Noh Dae-lae, chairman of the Fair Trade Commission, said new cross-shareholdings in conglomerates should be tolerated during lousy economic times.

At a press conference in Sejong city Tuesday, Noh also said the chaebol should be allowed a grace period for any corporate restructuring required to reduce cross shareholdings.

The National Assembly is working on the legislation?to prohibit new cross-shareholding investments in conglomerates, part of the Park Geun-hye administration’s push for “economic democratization,” which will put restrictions on large companies and free up smaller companies from their dominance.

Big Business in Korea has a unique form of circular ownership of conglomerates that allows owner families to run the groups with small shareholdings. Critics have accused the owner families of using the system for their own power and control, and also said it led to serious mismanagement practices in the past.

The FTC was behind the policy prohibiting new cross shareholdings. But its chairman cited exceptions to the prohibition during the meetings with reporters.

In particular, Noh emphasized a grace period for corporate restructuring, and said the prohibition on new cross-shareholding should be waived if they are?closing unprofitable businesses?or raising funds to merge with other companies.?

“If the FTC prohibits those inevitable cross-shareholdings generated in the process of corporate restructuring, it is likely that the economy will collapse,” said Noh, “which is more significant than policies for fair competition.”

The chairman said exceptions to the prohibition of new cross-shareholding should be flexibly permitted so that it does not ruin companies.

Noh said existing cross-shareholding of conglomerates could be reduced by transparency rather than laws or regulations.

“The government is also partly responsible for the existing cross-shareholding ownership structure of the conglomerates as it pushed companies, for instance, electronics companies. into going into the petrochemical business when the Korean economy was in the stage of rapid growth.”

The FTC chair also shared his views on new regulations prohibiting conglomerates from using its subsidiaries exclusively as subcontractors or suppliers.

“The regulatory legislation of the conglomerates favoring their affiliates, which passed the National Assembly last month, is meaningful in that it has laid out a framework for filtering out unfairness in trade practices,” he said.

“Although some issues were not carried through due to differences in opinions by the opposition and ruling parties, the key regulations have been included. As it can prevent violations of fair trade, I should say the overall legislation was satisfying and in line with the government’s key goal of economic democratization.”