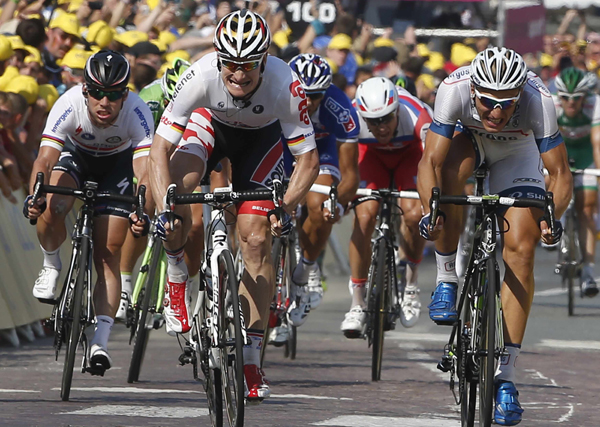 From left to right, Mark Cavendish of Britain, Andre Greipel of Germany and Marcel Kittel of Germany sprint to the finish of the 197-kilometer tenth stage of the centenary Tour de France cycling race from Saint-Gildas-des-Bois to Saint-Malo, Tuesday. [REUTERS/NEWS1]

Kittel held off countryman Andre Greipel and Cavendish in a dash to the line to win his second stage of the Tour. But Cavendish could be in trouble after appearing to veer into Dutchman Tom Veelers, sending him tumbling to the ground, as they sprinted for home.

Froome was at a safe distance behind the incident, much to his relief.

“That’s everyone’s worst nightmare. Fortunately I was to the side of that crash and went around it no problem,” Froome said. “I’m feeling really good, today was a great day for us, staying out of trouble, staying at the front. That was one of the objectives today, save the legs as much as possible.”

The 25-year-old Kittel became the first rider to win two stages on this year’s race, after taking the first stage of what has been an incident-filled centenary Tour so far.

“Things went very well with my team,” Kittel said. “I’m very proud that I could show today how fast I am, how strong my team is and how good we work together.”

Veelers was not seriously harmed and was later able to answer questions outside the team bus.

“I had the feeling Cavendish was boxed in my wheel,” Veelers said. “He touched my handlebars and knocked me over.”

The finish looked tailor-made for Cavendish, who was looking for his 25th career Tour stage win to move level with Frenchman Andre Leducq on the all-time list of Tour stage winners. “I think this team could’ve done something differently [today],” Cavendish said.

As the British rider moved into position to attack before the final corner, he appeared to lean into Veelers and send the Argos-Shimano rider flying off his bike. Race stewards were examining the incident.

After seeing a replay of the incident, Kittel gave Cavendish the benefit of the doubt.

“I cannot imagine that it was on purpose because it was a very hectic situation,” he said.

Froome, who was the Tour runner-up to countryman Bradley Wiggins last year, has a healthy lead over second-place Alejandro Valverde and two-time champion Alberto Contador. The British rider is looking to increase that in Wednesday’s time trial - a 33-kilometer (20.5-mile) dash from Avranches to Mont-Saint-Michel, a walled medieval masterpiece in Normandy.