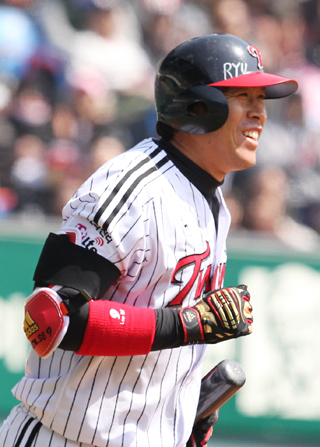 Lee Byung-kyu is enjoying a second heyday in his baseball career at an unlikely age.

He’s 38, but at 40 as Koreans would calculate it, the LG Twins slugger set a Korean record with his 10th-straight hit in a game against the NC Dinos at Jamsil Stadium on Wednesday.

The previous record for consecutive hits in the Korea Baseball Organization was nine, held by Kim Min-jae, then of the SK Wyverns, in September 2004.

The major league record is 12 consecutive hits, set by Johnny Kling in 1902 and Walt Dropo in 1952. Lee’s hitting streak ended in the same game on Wednesday.

Lee was coming off breaking another record last week. He hit a single, double, triple and then a three-run homer, all in one game against the Nexen Heroes on July 5, becoming the oldest KBO player to hit for the cycle.

The Twins, in third place, are cruising to their first playoff in 11 years and Lee’s strong performance is behind it.

“I don’t care about aging,” Lee told Ilgan Sports. “I am trying to do my best in earnest and I think that brings me a good result.”

He said that manager Kim Ki-tae is giving him a good rest.

“I have no difficulty because manager Kim Ki-tae is considerate of me,” Lee said. “If I am physically worn out, I get to chase the ball, but these days, I feel relaxed enough to wait for the ball.”

No other players in the league are near his batting average, but he is excluded from the batting title because he doesn’t have enough at-bats. He had 164 at-bats this season as of Wednesday, which is 59 shy of the minimum requirement.

Currently, Choi Jeong of the SK Wyverns is leading the league with a .338 average.

Lee will have to have 397 at-bats this season to qualify for the batting title. If Lee were to play in all of the remaining 56 games, he could be the first 38-year-old to win a batting title since Baek In-chun, who hit .412 in 1982, the year the KBO league was launched.