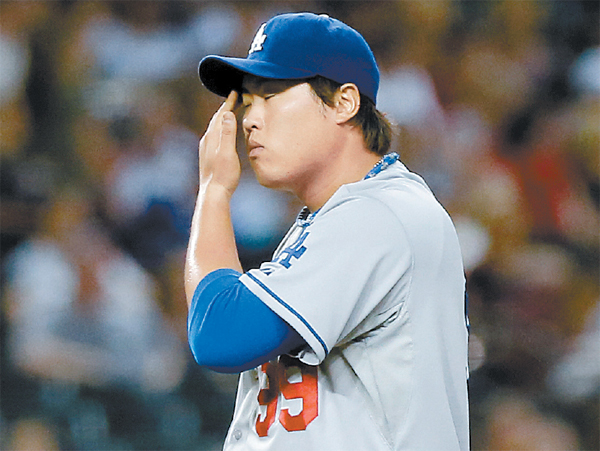 Los Angeles Dodgers pitcher Ryu Hyun-jin wipes his face after giving up a home run to Arizona Diamondbacks’ Aaron Hill during the first inning of a baseball game, Wednesday in Phoenix. [AP/NEWSIS]

PHOENIX - The Dodgers were going to head back to Los Angeles from a successful road trip regardless of what happened in their series finale against Arizona.

To close it out with a dramatic comeback and complete a three-game sweep, they couldn’t have scripted it any better.

Hanley Ramirez and A.J. Ellis hit consecutive homers in the 14th inning after Ellis tied the game with two outs in the ninth, helping the Los Angeles Dodgers beat first-place Arizona 7-5 Wednesday night for their first sweep of the Diamondbacks in two years.

“For us to walk out of here fighting and grinding the way we did, it’s going to make for a real fun trip home,” Ellis said.

Los Angeles won six of its first eight games on the road trip, including the first two against Arizona.

The Dodgers closed it out with a flourish.

With the Dodgers still in it because of Ellis’ hit in the ninth off Heath Bell, Ramirez hit the first pitch of the 14th off Josh Collmenter (4-2) just over the wall in right field. Five pitches later, Ellis made it 7-5 with his fourth homer.

Kenley Jansen (3-3) pitched the final two innings for the Dodgers, who used all of their position players and had Zack Greinke, Monday’s starter, pinch hit in the 10th inning.

“Obviously, you want to come in and win a series, but to win three was big for us because it’s a two-game swing when you’re playing them,” Dodgers manager Don Mattingly said.

Aaron Hill homered and drove in two runs, and Paul Goldschmidt hit a two-run double for the Diamondbacks, who went seven innings - until two outs in the 12th - without a hit.

Arizona appeared to be in position for the victory after Bell got two quick outs.

But, as has been the case lately, the Diamondbacks couldn’t hold the lead.

Adrian Gonzalez, who led off the seventh inning with a solo homer, worked a two-out walk off Bell in the ninth inning, then Ramirez moved pinch runner Jerry Hairston to second with a single. Ellis followed with his tying single off Bell, his fifth blown save and the Diamondbacks 19th.

“We have to figure out some things so guys can get some outs later in the game,” Diamondbacks manager Kirk Gibson said.

He gave up a solo homer to Hill in the first inning and a sacrifice fly to him in the third. Given the lead back, Ryu allowed a pair of one-out singles in the fifth and Goldschmidt followed with his two-run double. Martin Prado made it 5-3 with a run-scoring single.