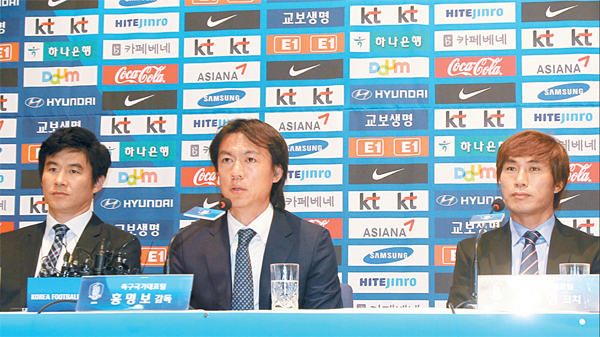 New national football team Coach Hong Myung-bo, center, is flanked by his coaching staff, at a press conference at the National Football Center in Paju, Gyeonggi, yesterday. By Jung Si-jong

Hong Myung-bo said yesterday that he will enforce a strict code of discipline on his players as the new Korean football coach aims to tackle age-old discord on the national team, which was revealed through Ki Sung-yueng’s online criticism of Hong’s predecessor, Choi Kang-hee.

“I am tired that some problems already bulged out even before I started,” Hong said at the National Football Center (NFC) in Paju, Gyeonggi, where he announced the 23-man roster for his first assignment, the East Asian Cup. “But, I think it is not bad to solve these problems first and move on. It is better that I deal with those problems at a crucial time.”

Choi’s squad showed signs of division toward the end of its qualifying campaign for the Brazil World Cup. Choi was criticized for his apparent preference for domestic players over Europe-based players. The crack became more visible when Ki, a Swansea City midfielder, was found to have ridiculed Choi on several occasions on his Facebook page, a shocking revelation to many football fans in this seniority-based society.

“Ki apologized for his behavior last week and the Korea Football Association said on Wednesday that it will give him a stern warning, but not a strict punishment, in an apparent bid to put an end to the controversy. 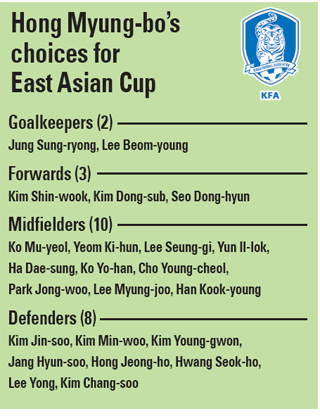 Hong, who stressed teamwork at his first press conference as national coach last month, appeared unhappy with Ki’s sneering at Choi. Hong will likely enter the Brazil World Cup with more overseas players than his predecessors, and thus will have to deal with the growing egos of players with experience in foreign leagues.

“Not only as the national team coach, but also as a seonbae (senior) football player, I wish Ki Sung-yueng would expand the space of his inside world rather than communicating with the outside world,” Hong said.

Hong said that he will first change the team’s dress code, pointing out the casual clothes many of the team members wore while reporting to the NFC. “It did not look good when they were reporting to the team in T-shirts and torn blue jeans,” Hong said. Hong said that he tried to regulate the dress code with the Olympic team, but gave it up, after learning that the players couldn’t afford to buy suits.

“But we are in a different situation now,” Hong said. “I wish the players would report to me in clean and simple dress. I would like to make the players think from the beginning with what kind of attitude they are playing.”

As expected, his first team as the national coach has many players from the bronze medal team from the 2012 London Olympics, which he led.

Eight players from the Olympic team joined the national team - Lee Beom-young and Park Jong-woo of the Busan I’Park, Kim Young-gwon of Guangzhou Evergrande, Jang Hyun-soo of FC Tokyo, Hwang Seok-ho of Sanfrecce Hiroshima and Han Kook-young of Shonan Bellmare. Two wildcard players from the Olympic team - Jung Sung-ryong of the Suwon Bluewings, and Kim Chang-soo of Kashiwa Reysol also came on board.

The number of the Myung-bo kids on the national team extends to 14, including six players who played in the qualifying stage for the London Games: Hong Jeong-ho of Jeju United, Kim Min-woo of Sagan Tosu, Ko Mu-yeol of the Pohang Steelers, Yun Il-lok of FC Seoul, Cho Young-cheol of Omiya Ardija, and Kim Dong-sub of Seongnam Chunma.

“I chose the players considering their good playing ability first,” Hong said. “Except for several players, I have played with them, from one year to three years. I will be able to see how those players have grown so far.”

Hong also kept some regulars from Choi’s squad, including Kim Shin-wook, a lanky Ulsan Hyundai striker, as well as young midfielders Lee Seung-gi of the Jeonbuk Motors and Lee Myung-joo of the Pohang Steelers.

Yeom Ki-hun, a National Police FC striker, also made the roster. Yeom, 30, who was capped 46 times, joined the national team for the first time since May 2012.