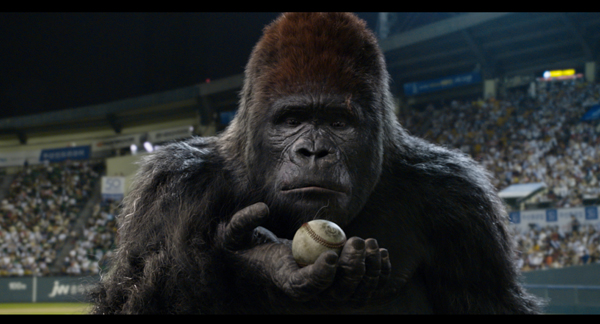 Baseball and melodrama: two things that Koreans love dearly. Throw in an adorable gorilla with a great swing, and you get one of the most anticipated films of the summer.

“Mr. Go” is set to open in Korea on Wednesday, China on Thursday and Singapore next week. Soon after, it will follow suit across Asia in an unusually wide opening for a Korean film.

And with so many nations signing up, the distributor, Showbox, is expecting big things from the 22.5 billion won ($20 million) production - one of the largest budgets ever in Korean cinema.

The film was directed by Kim Yong-hwa, who has built a solid name from a string of hits, including “200 Pounds Beauty” and “Take Off.” nothing in those films suggested anything as ambitious as “Mr. Go,” which centers on a 285-kilogram (628-pound), baseball-playing gorilla and was filmed in stereoscopic 3D.

With about $5 million of the film funded by the China-based Huayi Brothers, the movie is a true China-Korea coproduction. The opening narration is in Korean, but one of the lead actresses is Xu Jiao from China, and a substantial part of the story unfolds in Chinese.

Xu plays Wei Wei, a 15-year-old ringmaster who runs a circus that features Ling Ling, a baseball-slugging gorilla, and is home to a group of orphans. When her grandfather and only relative dies in the 2008 Sichuan earthquake, he leaves behind huge debts and some angry loan sharks who come after Wei Wei.

To save the circus and the orphans, Wei Wei needs money, so she accepts a Korean sports agent’s offer to bring Ling Ling to the Doosan Bears.

The agent, Sung Choong-su (Sung Dong-il), is a sly materialist and a pretty funny character, with on odd speaking style and comical gestures.

Once Ling Ling arrives in Korea, hilarity ensues as the Koreans, Chinese and ape try to make sense of one another. Using real Korean Baseball Organization teams and cameos by stars such as Choo Shin-soo and Ryu Hyun-jin, the film tries its best to inject a dose of reality, perhaps to make up for a lead who is all CGI.

As long as you can swallow the premise of a primate playing baseball, the movie is entertaining enough, not to mention emotional.

“We tried to maintain balance without concentrating on one aspect,” said Kim about his take on the classic 1980s comic book by Heo Young-man.

Because the film is over 2 hours long - 132 minutes to be exact - sometimes the story is a bit slow and you wonder if Wei Wei and Ling Ling will ever go back home, where the loan sharks are wreaking havoc. And somewhere along the way the “evil” gangsters lose their credibility, which makes the predicament seem a lot less serious. But, not to worry, there are so many other obstacles that Wei Wei and Ling Ling face that it’s difficult to keep tabs on them all.

Then, just as the end looks near, there’s one more big twist, as Wei Wei and Ling Ling face a final, bigger obstacle that really jolts the story full of adrenaline.

Even when the computer graphics come up short, the 3D action sequences, full of balls flying every which way, keep the story going. And with the balance of baseball, a furry animal, humor and tearjerking moments, “Mr. Go” seems to have the elements that will appeal to Korean viewers of all ages.