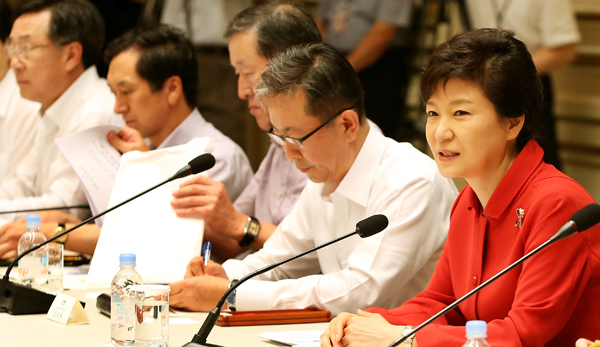 The government wants to drastically ease regulations on business investment as part of an effort to create an investor-friendly environment.

At the second trade and investment promotion meeting presided over by President Park Geun-hye at the Blue House yesterday, about 180 government officials shared the view that the domestic market is heavily regulated and needs radical reform.

“It is important to establish an environment where businesses can trust government policies and make investments, despite uncertain conditions in the economy,” Park said at the meeting. “Investment is the key factor in job creation. The government should make a drastic regulatory reform to improve the current environment.”

The Ministry of Strategy and Finance and the Ministry of Land, Infrastructure and Transport decided to ease regulations on building plants and business facilities to boost investment in the private sector.

The core of the latest plan is to allow companies that have been unable to construct large facilities because of regulations on land use and strict financial requirements to execute their plans.

According to the Finance Ministry, there are five projects currently being delayed. If those projects are given the green light by the government, there will be about 10 trillion won ($890 billion) in new investment over the next two or three years.

The Land Ministry will focus on changing the government’s land-use regulations.

Under current law, land is divided into two categories: city and non-city. City land is then classified as residential, commercial, industrial or green. Non-city classifications include government management, agricultural and environmental preservation.

The government determines what kind of buildings or facilities can be built in each classification. Businesses can build facilities for commercial use only in commercial areas.

Such regulations have been the biggest obstacle for companies seeking to expand, according to a recent poll by the Korea Chamber of Commerce and Industry.

The Land Ministry decided to switch to a system that bans types of construction from certain areas, while allowing all others.

The ministry also decided to open areas under government management to businesses. The areas under management account for 11 percent of the nation’s total area.

Therefore, under the new system the government will stipulate that any facilities, except for apartments, restaurants, accommodations, environmentally harmful plants, retailers larger than 3,000 square meters, office buildings and recreational facilities, can be built in the new areas.

The government tried a similar system in 1994 that resulted in excessive development without regard for the environment. At the time, the government opened agricultural areas, taking about 27 percent of the total land to the private sector.

“We welcome the government’s efforts to promote investment after putting an end to the economic democratization controversy,” said an official at the Federation of Korean Industries, the largest business lobby. “But the plan will need support from lawmakers to become law and lead to real investment.”

Meanwhile, the Ministry of Trade, Industry and Energy announced at the meeting a plan to support exporters in the second half of the year, in particular companies sending consumer goods to China.

The ministry will help small exporters sign contracts with large retailers in the country and set up stores exclusively for Korean products in those retailers.

The first presidential trade and investment meeting was held May 1.