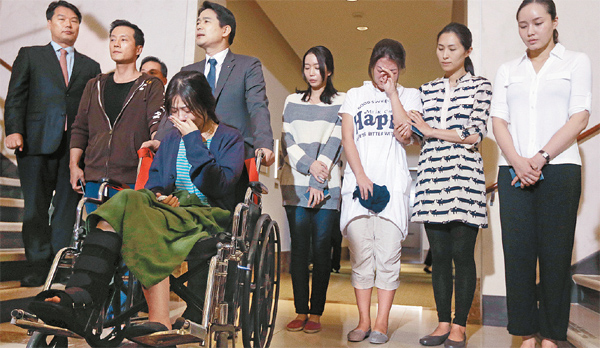 Flight attendants from Asiana Flight 214 including Kim Yoon-joo, in the wheelchair, appear at a press conference in the San Francisco Airport before departing for South Korea. Six of the 12 cabin crew aboard the flight when it crashed returned to the country late yesterday evening. [AP/NEWSIS]

It was a heroes’ welcome last night for half of the 12-person cabin crew aboard Asiana Flight 214, which crash-landed at San Francisco International Airport.

Family members and a crowd that included hundreds of reporters and photographers welcomed them home.

Some of the family members began to cry when they saw them come through the arrival gate and warmly embraced them.

During a short press conference at the San Francisco airport before they departed for Korea, Lee Yoon-hye said, “I really feel sorry that this accident occurred. I will pray for the recovery of all those people hurt in the crash.”

Kim Yoon-joo, whose right leg was injured in the crash-landing, appeared in a wheelchair.

She wept on her arrival. Kim started working as a flight attendant only a month ago, the airline said.

Yoon-hye was the last person to leave the mangled aircraft after all the passengers were evacuated despite suffering from an injured pelvis.

She had more than 18 years of experience and is one of the best flight attendants at the airline, the company said.

She also served on the presidential airplane from 2000 to 2003, according to the airline.

According to Asiana, seven of the 12 flight attendants were knocked unconscious after the crash-landing but five attendants, who were mostly on the left side of the aircraft, conducted the evacuation, opening emergency exits, deploying inflatable slides and guiding passengers out of the smoking wreck.

The U.S. National Transportation Safety Board, which was in charge of investigating the July 6 crash, approved the crewmembers returning to Korea after interviewing them.

Two Thai crew members who were seriously injured in the crash are currently hospitalized in San Francisco.

The remaining four Korean crew stayed in the U.S. because they are scheduled to be interviewed by the NTSB in the next few days.

“We will do everything we can to heal the crew’s mental and physical wounds,” a spokesman for Asiana Airlines said.

After one additional Korean passenger returned with the crew, 27 out of the 77 Korean passengers on board the fateful Flight 214 returned as of yesterday and the Ministry of Land, Infrastructure and Transport said 12 more will come back by Sunday.