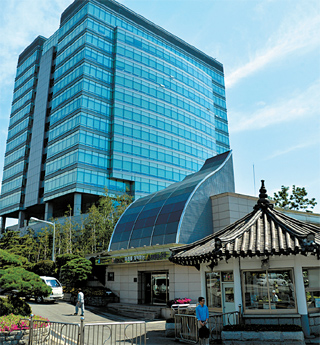 Headquarters of Hyundai Heavy Industries in Dong District, Ulsan. Five former and serving senior officials of the company were arrested by prosecutors on bribery charges in the scandal over corruption in the supply of parts to the country’s nuclear power plants. [NEWSIS]

Prosecutors raided the headquarters of Hyundai Heavy Industries Wednesday and arrested five former and serving senior officials on bribery charges in the scandal over corruption in the supply of parts to the country’s nuclear power plants.

Ulsan-based Hyundai Heavy Industries, the country’s largest shipbuilder, also makes nuclear reactor parts. It is suspected to be the source of 600.2 million won ($534,266) in cash found at the home of a senior official at the Korea Hydro and Nuclear Power Corporation.

The special investigation team at the Busan Eastern District Prosecutors’ Office conducted a search and seizure raid at the shipbuilder’s headquarters as well as the homes of the company former and serving senior officials, confiscating account books, computer files and contracts signed with the power corporation.

A senior power corporation official surnamed Song has been indicted for taking bribes.

Song, who was in charge of choosing suppliers of reactor parts for nearly three years from early 2010 until recently, allegedly testified that he received 700.2 million won from industry players, including Hyundai Heavy Industries, in kickbacks for special treatment.

The prosecutors discovered 600.2 million won on a raid of Song’s house. They suspect the remaining 100 million won was distributed to even bigger players at the Korea Hydro and Nuclear Power Corporation and influential figures in politics or government.

The prosecutors are not ruling out the possibility that Hyundai Heavy Industries bribed its way into a deal in 2011 to supply parts to the state-run corporation.

Industry watchers say Hyundai Heavy Industries supplied reactor components such as emergency generators and pumps worth more than 300 billion won to the state-run corporation over a two-year period from 2011.

Prosecutors said that one of the five men arrested Wednesday, a former Hyundai Heavy Industries executive surnamed Kim, allegedly received over 2.5 billion won in bribes from seven subcontractors of the corporation for favors over an 11-year period from 2001 until 2012 as head of the 25-member electric and electronic systems business team, which was in charge of supplying components including emergency power generators for reactors.

The prosecutors suspect some of the 2.5 billion won in bribes ended up in the pockets of officials at the power corporation.

As of press time Thursday, it had not made a formal statement on the raids or arrests.

“We have carried out an internal investigation into the allegations and are now fully cooperating with the prosecutors,” said a Hyundai official from the public relations team speaking on the condition of anonymity.

“We do believe that the prosecutors have reasons to suspect there was foul play. [But] we do not know the depth of the graft practices as the prosecutorial investigation is still ongoing.”