Which razor really cuts it?

Which razor really cuts it? 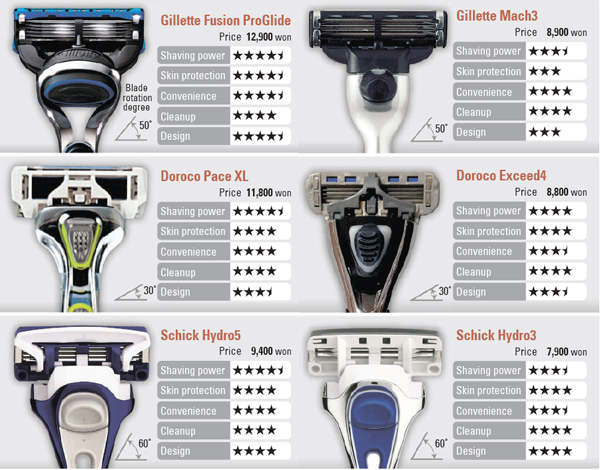 Even with the fanciest electric shaver nothing can beat the clean-cut shave of a razor. Generally affordable prices are one reason why changeable blade razors sell so well.

Currently, the U.S. brands Gillette and Schick and the Korean brand Doroko dominate the local market.

The JoongAng Ilbo tested six razors from the three companies to see which performed the best. Models with batteries that vibrate were excluded.

The JoongAng Ilbo tested each razor for five qualities: its ability to shave, its affect on the skin, the convenience of using the product, how easily hair washes off and design.

We formed two groups to judge the products. The first were representatives from six major retailers: E-Mart, Lotte Mart, Homeplus and convenience stores CU, GS25 and Seven Eleven. The second group were four men representing four age groups: those in their 20s, 30s, 40s and 50s.

The testers tried the products between June 25 and July 4.

Gillette’s Fusion ProGlide, which retails for 12,900 won ($11.52), topped the list. In only one category did the Fusion ProGlide not triumph, falling slightly behind Doroco’s Exceed4, and that was the ease of washing hair off the blade.

Testers gave it high marks for the flexibility of the blade and how closely it rode the skin.

Schick’s Hydro5, which retails for 9,400 won, got a good review for the comfort of its grip and its two-tone handle, which goes perfectly with the white tiles of a bathroom.

Testers particularly praised the ease with which the blade can be put on or taken off.

But that lost the razor some points too, as testers thought the connecting part seemed flimsy and easily breakable.

Also, the blades didn’t ride the face as closely as Gillette’s razor. Yet the testers said the gel band soothed the skin.

The only other inconvenience was that the head was so big it was hard to reach tight areas of the face like right under the nostril.

Doroco’s Pace XL, which retails for 11,800 won, was a product that the testers said saved time. It has the highest number of blades among the razors tested, and as a result it shaves faster. Hair came off quickly.

Testers said as the blade-switching part was metal and durable. The main problem was the razor was too heavy.

Although Doroco’s Exceed4, priced at 8,800 won, met the basic requirements, testers said it wasn’t easy to use. It was difficult to redirect the blades while shaving along the jaw line.

Schick’s Hydro3 received a relatively good number of points, especially the smooth of the shave and how easy it was to clean.

Gillette’s Mach3 didn’t sit too well with testers. It got the highest points for irritating the skin while its ability to shave was the lowest. The only good thing about the product was that it was light. The Mach3 weighs 23 grams, which is much lighter than the 49.2-gram Pace XL.