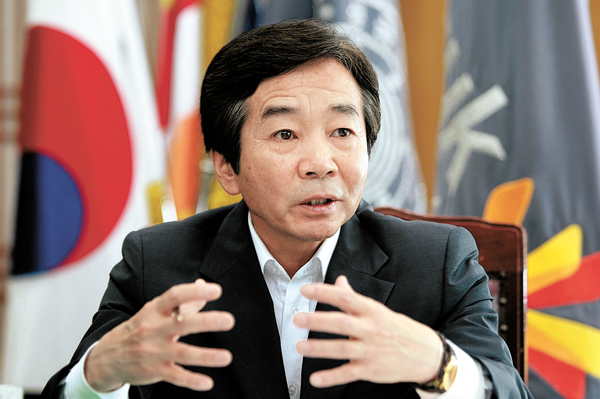 Lee Kye-young, president of Dongguk University’s Gyeongju Campus, emphasizes that the recent change in the school system is not “a restructuring of the organization but only a change in curriculum.” By Gong Jeong-sik

President Lee Kye-young of Dongguk University’s Gyeongju Campus emphasized that the recent change in the school system is not “a restructuring of the organization but only a change in curriculum.”

“We launched a large-scale renovation of our school system,” Lee said. “The original 41 majors were reduced to 30. The past curriculum revolving around a professor’s concentration is now switched to one accommodating students and the local community’s needs.”

For example, majors such as leisure management, hotel management and restaurant management were put under one overarching concentration called sightseeing management, so that the students can take classes from other similar fields.

Also, the college expanded its convergence policy to those majoring in a language such as English, Japanese or Chinese, requiring them to minor in business or social sciences.

The Medical Bioengineering Technology Department will contribute to the medical tourism and healing industry that the North Gyeongsang Provincial Government and the Gyeongju city government are promoting.

The department will also work closely with medical schools, colleges of oriental medicine and university-affiliated hospitals.

The International Healing Center was also opened on-campus last month. It was the first center in the country dedicated to solving family conflicts or other problems through dialogue.

The Mechanical Component System Technology Department is working to meet the demands of automobile parts suppliers near Gyeongju.

The College of Energy Environment also gained momentum under this policy. It was established five years ago to provide human resources to Gyeongju’s Wolseong Nuclear Power Plant and radioactive waste disposal facility.

It is already showing significant progress in terms of employment. Posts were put up across the campus announcing the employment of Dongguk students for companies related to nuclear power development.

“The renovation of the curriculum is designed to cope with the anticipated crisis about to hit universities outside of Seoul,” Lee explained.

The faculty suffered during the adjustment period. Criticism arose that the university was changing the curriculum only to increase student employment rates.

But the counter-argument that the university should first survive in this highly competitive academic field prevailed.

According to a report by the Korea Research Institute for Vocational Education and Training, the number of high school graduates will be less than the number of students sought by colleges starting in 2018. In 2020, it will be 30,000 less and in 2022, 130,000 less.

By then, around 100 colleges with class sizes of 2000 students per class will be forced to close down.

Lee raised his voice to criticize the Ministry of Education.

He said it is a “problem” for the ministry to apply the same standards to evaluate colleges in the capital area and the country area. 50 percent of criteria in evaluating a college is related to the enrollment rate and employment rate.

These two criteria are very unfavorable for colleges in the countryside, the president said. Lee calls for new evaluation standards. This goes along with the ministry’s decision not to include the employment rate of humanities, art, music and physical education majors in evaluating the quality of colleges.

This year is the 35th anniversary of the establishment of Dongguk University’s Gyeongju Campus. It was built in the old capital of the Shilla Dynasty with the intent of redeeming Dongguk’s founding goal to foster human resources with a merciful spirit.

The Gyeongju Campus located at Suk-jang Dong has the same roots as the main Dongguk Campus in Seoul, but the school administration and college evaluations are run separately.

“Dongguk University itself is very widely known, but it’s a shame that the Gyeongju Campus, which includes a medical school and a college of oriental medicine, is not that well-known,” Lee noted.

Even so, Dongguk University’s Gyeongju Campus has accomplished a substantial achievement. It was named one of “the best teaching colleges” and last year it ranked five out of all the private colleges in the countryside in the college evaluation done by the JoongAng Ilbo.

Also, it earned the chance to run 50 billion won ($44 million) worth of government-subsidized business, including the immersive media industry headed by the Ministry of Science, ICT & Future Planning.