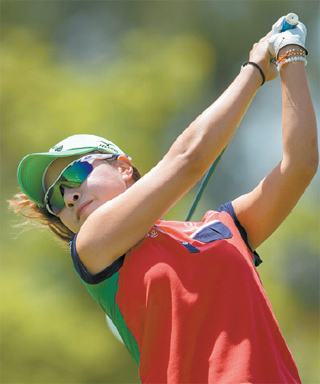 Park Hee-young hits off the fourth tee during the third round of the Manulife Financial LPGA Classic in Waterloo, Ontario, Saturday. [AP/NEWSIS]

WATERLOO, Ontario - The course was dry yet the greens remained soft at the Manulife Financial LPGA Classic on Saturday. Players aimed straight at the pins for a third straight day and the scoreboard was loaded with low numbers as a result.

Korea’s Park Hee-young shot a career-low 61 to move into sole possession of the lead at Grey Silo Golf Course. Her 20-under 193 total left her one shot up on American Angela Stanford and two strokes ahead of Scotland’s Catriona Matthew.

With 21 players already in double digits at 10 under or better and course conditions likely to remain the same, expect a shootout on Sunday.

“When you see everybody going low, you have to go with them or you’re going to get left behind,” Stanford said.

Park’s three-round score was the best 54-hole total on tour this year and it was just the 11th time a player has shot 61 in tour history. She almost went one better - nearly chipping in for eagle on the 18th before tapping in a short putt for her sixth birdie on the back nine alone.

“I finished really well, finished (with) the birdie, so it’s going to be fun tomorrow,” she said.

Matthew (68) started the day with a three-shot lead on Stanford (64) but fell back with a double-bogey on the par-3 12th. She followed with a birdie and got another stroke back with a birdie on the final hole.

“Yeah, didn’t maybe click quite as well today, didn’t hit it quite as close,” Matthew said. “Had a lot of chances but just kind of left a few, and then a silly double on 12, kind of getting a bit greedy going for the hole and just pulled it.

“Nice to come back with a couple birdies.”

Korea’s Park In-bee remained in contention after a 68, good for a ninth-place tie at 13 under. Park has won her last three tournaments.

“I had a lot of opportunities today but missed a lot of putts,” she said. “I mean I hit the ball the way I wanted to, that’s the positive part to take away. Hopefully the putts will go in tomorrow.”

Lorena Ochoa was the last player to win four straight LPGA tournaments, accomplishing the feat in 2008. Nancy Lopez holds the tour record with five consecutive wins in 1978, a mark tied by Annika Sorenstam over the 2004-05 seasons.

The sunny, warm and breezy conditions held steady throughout the day on the 6,330-yard, par-71 course. American Gerina Piller got things started early in the afternoon with a 62, taking a stroke off the competitive course record.

Her mark lasted for about two hours.

Park hit a slick four-foot tester for the 61 as the gallery roared its approval. She smiled, waved and tossed the souvenir ball into the grandstand.