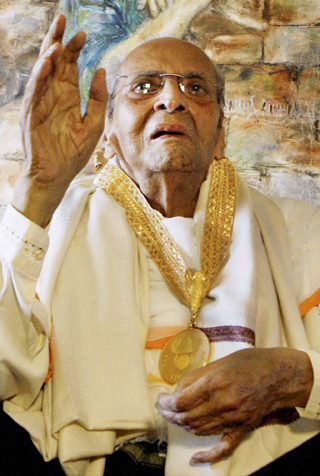 NEW DELHI, India- India’s legendary actor Pran, who played some of Bollywood’s most memorable villains in a career that spanned six decades, died of pneumonia at a Mumbai hospital Friday, his doctor said. He was 93.

Pran acted in more than 350 Hindi movies in a prolific career dating back to the 1940s. He played a vast range of roles - a hero, villain and character actor - but was best known for his bad guys, earning the honorific “Villain of the Millennium.”

In May, an ailing Pran was presented the Dadasaheb Phalke Award, the Indian government’s highest honor for cinema, at his Mumbai home by Information and Broadcasting Minister Manish Tewari.

Pran also received several other prestigious awards, including Filmfare magazine’s “Lifetime Achievement Award” in 1997 and the “Villain of the Millennium” by Stardust magazine three years later.

In a career that lasted into the 1990s, he became most famous for his roles as a villain in movies such as “Bari Behen” (Elder Sister), “Azaad” (A Free Man), “Jis Desh Men Ganga Behti Hai” (A Country Where the Ganges River Flows), “Half Ticket,” and “Johnny Mera Naam” (Johnny Is My Name).