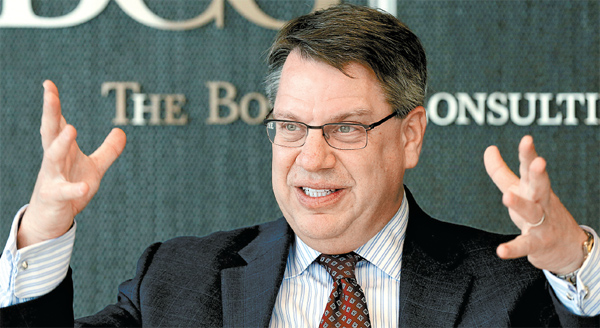 Rich Lesser, president and chief executive of The Boston Consulting Group, stresses that Asia, despite its gloomy outlook, is still an attractive market for investment, during his recent visit to Seoul. [JoongAng Ilbo]

The outlook for the Asian market, based on latest figures, seems gloomy.

In the first half of this year, the benchmark Kospi plunged 6.7 percent and the Korean government’s outlook for growth in 2013 is 2.7 percent, lower than its 3 percent target. The gloom is not limited to Korea. In the first half of the year, China’s Shanghai Composite Index fell 13 percent. The International Monetary Fund also lowered its annual outlook for China’s economic growth from 8 percent to 7.75 percent. What’s even more discouraging is that Goldman Sachs released a pessimistic outlook saying China can expect annual growth to fall below 6 percent over the next seven years.

In an interview with the JoongAng Ilbo last week, Lesser, 50, said he is aware many businesses feel uncertain about the Asian market, but if they want to grow, their focus should be on the region. It was Lesser’s first visit to Korea since becoming CEO of the consulting group in January.

According to Lesser, a growing number of Asians are becoming middle class, a trend that will create a new consumer market worth $10 trillion. He noted that Korean companies have prospered through exports and know their way around the global market, but they seem to have little understanding of the Asian market.

Many global companies are focusing on Asia, Lesser said. For example, Schneider Electric, a France-based IT company, has one headquarters in France and another in Hong Kong.

Though there’s nothing new about advising companies to concentrate on the Asian market, Lesser noted that the focus should be on building a big consumer market. He anticipates that in China and India there will be 1 billion middle-class consumers, and in the long-term the two countries’ annual economic growth rate will be in the neighborhood of 8 percent.

Though there are market volatility and investment risks for both countries, Lesser said that is part of the “growing pains.”

During the interview, Lesser shared his views on Korean companies and what should be done to maximize competitiveness.

“We cannot disclose which companies Lesser met [during his visit to Seoul] because it is against office rules,” said an official from The Boston Consulting Group. Industry insiders, however, note that Lesser met with top management of leading companies including Samsung and Hyundai Motor.

According to Lesser, Korean companies have become global, though they joined their industries relatively late. He said Korean companies have the power to push ahead and set agendas with clear goals. In particular, the CEO noted that he considers Samsung Electronics to be one of the companies with a successful leadership model, along with General Electric. Even during a rapidly changing environment of uncertainty, Samsung is carrying out a long-term management strategy, Lesser said.

As for shortcomings, the CEO pointed to a lack of creativity. For a long period of time, Korean companies competed by following the industry leaders and improving on the products they produced. But now, Chinese companies are catching up with Korean companies using the same strategy. Lesser noted that companies should utilize the creativity within their organizations to innovate, saying young people with entrepreneurial ability should be given more authority.