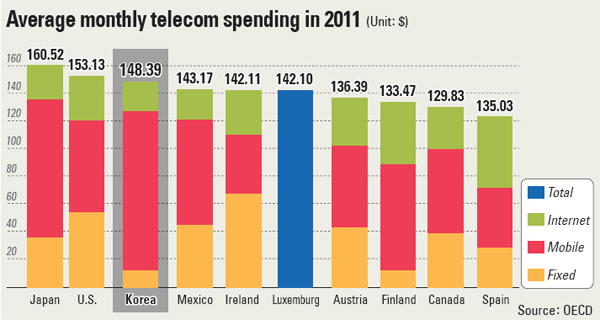 Korean households’ spending on telecommunications including mobile phone bills ranked third among members of the Organization for Economic Cooperation and Development (OECD), trailing Japan and the United States.

The communications outlook is published every two years.

When it comes to mobile fees, one of the subcategories for telecommunications spending, Korea topped the 34 OECD members. Korean households’ monthly expenditure on mobile services in 2011 averaged $115.50 whereas Japanese and Mexicans, the second- and third-ranking countries, spent $100.10 and $77.40.

Korea, famously known as the world’s most wired country, spent an average of $43.60 monthly on wired telecommunications and $21.20 on broadband Internet subscription for computers. Contrary to widespread perception, China, the world’s largest smartphone market, had the smallest monthly spending at $30, according to the report.

“Korea saw a particularly high portion of expenditure on smartphones and wireless Internet,” said the report. “Koreans consume 1.2 gigabytes of data per month, according to Cisco data.”

The OECD has used purchasing power parity to balance the different price levels in respective member countries when interpreting the data.

The report contradicts Korean mobile service providers’ claims that they offer cheaper rates than other developed economies. Trimming mobile phone bills was a campaign pledge by President Park Geun-hye in last year’s election campaign, and consumers have wondered if their bills are too high.

Consumer groups such as the People’s Solidarity for Participatory Democracy, citing data from the state-run Statistics Korea and the Bank of Korea, say the 7 percent of monthly expenses Koreans pay in telecom fees is nearly four times the 2 percent OECD average.

In mid-May, the Ministry of Science, ICT and Future Planning announced it would abolish fees that users pay to mobile carriers when they start contracts - so-called mobile carrier membership fees ranging from 24,000 won ($21) and 39,000 won. In 2011, the three carriers earned 570 billion won from membership fees. They will be slashed by 30 percent in September and abolished by 2015.