Volleyball player threatens to quit over her free-agent status

Volleyball player threatens to quit over her free-agent status 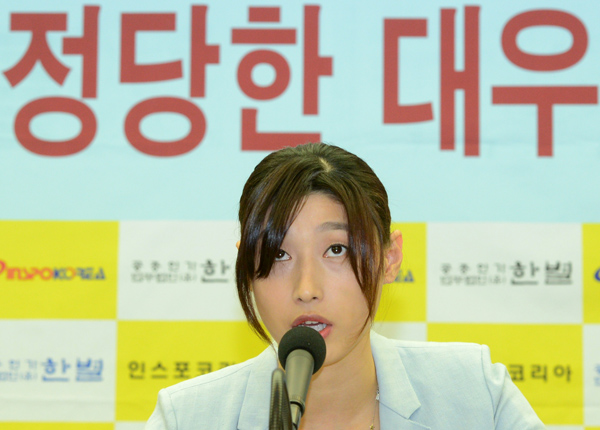 World-renowned volleyball star Kim Yeon-koung warned yesterday that she will desert Korea’s domestic league for good and boycott the national team unless she gets a “specific” response to resolve a long-lasting dispute over her right to play overseas.

In the latest salvo to her former club, Heungkuk Life, and the two domestic governing bodies - the Korea Volleyball Federation (KOVO), and the Korea Volleyball Association (KVA) - Kim demanded that they give her an answer about the legal constraints that could keep the 25-year-old spiker aground for years.

“If I can’t get a specific answer from KOVO by July 25, I will not play in the domestic professional league again,” Kim said at the press center in central Seoul. “If I can’t get an answer from the KVA by the same day, I will retire from the national team until the matter is solved.”

The trouble besieging the 1.92-meter (6-foot 3-inch) player started in July 2012 when she extended a contract with the Turkish club Fenerbahce, with whom she played for a year, for two more years. Kim, who joined Heungkuk in 2005, claims that she has earned the right to be a free agent, while Heungkuk denies it.

Kim, the top scorer during the London Olympics, spent her first four professional seasons with Heungkuk, followed by two years on loan in Japan through early 2011. Heungkuk said the years she spent overseas did not count as service to the club and had to be made up in Korea’s V-League. Korean authorities agreed with the club. Under Korean rules, six years with a domestic club is the threshold to become a free agent.

?The matter surfaced again when Heungkuk cited a rule from KOVO on July 10 that Kim arbitrarily forwent her V-League membership, which the club claimed forbids her from playing in any leagues, including overseas. Kim’s side refutes this point.

What makes it more complicated - or may help solve it - is an interpretation over the “club of origin.”

KOVO is citing a September 2012 ruling by the FIVB made at the request of KVA, in which the world’s governing body said Kim belongs to her “club of origin,” Heungkuk.

Kim’s side claims KVA intentionally translated the Korean words for a “former club” into a “club of origin,” to mislead FIVB in interpreting the relationship between Kim and Heungkuk.

Yesterday, Kim urged the KVA to inquire the FIBV again regarding her “club of origin.” Kim said that it was not just for herself, but for younger players who could face a similar problem in the future.