Can foreign banks make it in Korea?

Can foreign banks make it in Korea? 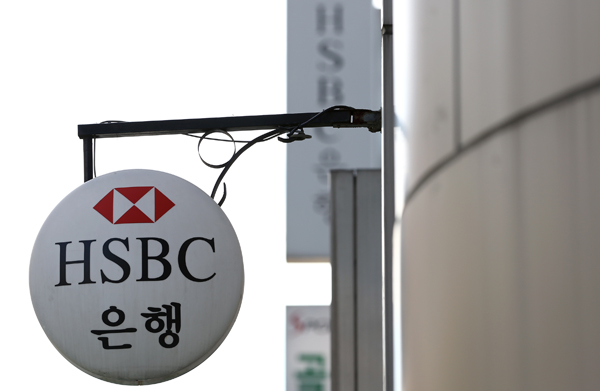 The announcement by HSBC earlier this month that it will end its retail banking business in Korea is raising questions about the future for foreign banks in the local market.

On July 5, HSBC released a statement saying it will start winding down its retail banking and wealth management business in Korea, which will involve closing 10 out of 11 branches.

The move is part of a broader strategy to cut costs. In May 2011, HSBC announced an overhaul in its strategy, focusing on cost-cutting after its new chief executive, Stuart Gulliver, came in earlier that year. Two years later, Gulliver was quoted as saying to investors that HSBC “will continue to exert tight cost discipline whilst streamlining processes and procedures. This enables us to invest in growth and global standards.”

According to HSBC, since the change in strategy in May 2011, HSBC has undertaken 52 closures and disposals, including exiting from retail banking and wealth management in 17 markets. Korea is the 18th.

“HSBC Group’s strategy is to focus on retail banking only where we can achieve profitable scale,” said an official from HSBC. “We are not exiting Korea. We have a successful global banking and markets business in Korea which has been profitable and which we will continue to develop.”

Industry insiders, however, note that HSBC’s move was “inevitable” taking into consideration that the Korean financial industry is already advanced in terms of the consumer banking market, leaving little room for a foreign bank like HSBC.

“From a group point of view, it would have been inevitable to withdraw its retail banking business from Korea,” said an official from the Financial Supervisory Service. “It was simply part of the group strategy to pull out from countries that are not profitable enough.” 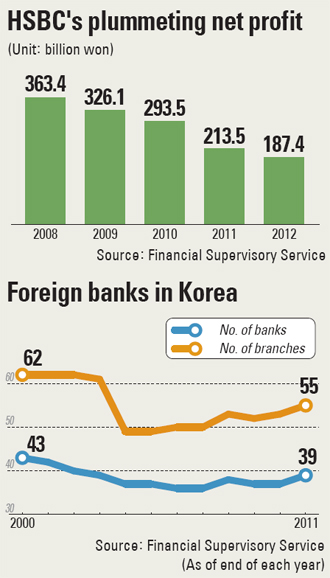 Ever since the outbreak of the 2008 global financial crisis led by the bankruptcy of Lehman Brothers, the global financial market has been on troubled waters. Following the U.S.-led economic meltdown, concerns rose over the health of financial systems in major countries including the United States and the United Kingdom as global credit rating agencies cut ratings outlooks.

Although Korea’s fundamentals have remained relatively stable compared to other nations, the local banking industry has been affected by the sluggish economy and struggled to make profits with the lingering low interest rates and rising household debts. According to the Bank of Korea, in the first quarter of this year, household debt totaled 961.6 trillion won ($855 billion). The stagnant real estate market has led households to borrow more to pay back their mortgages or jeonse (renting with lump sum deposits).

FSS data shows that local banks’ profits from interest dropped 44.9 percent in the first quarter compared to the previous year. The plummeting profits have forced some banks to close down branches and lay off workers. And foreign banks have it no better. HSBC was the first foreign bank to enter Korea’s consumer banking business and the first to shut down, according to industry insiders.

“It is difficult for a bank to make profits here,” said an industry official. “The consumer banking business is already saturated with local banks and the interest rates on household mortgages is low.”

If the market is big enough, the official said, a bank might be willing to take the challenge. “But the volume of the Korean banking industry isn’t big enough.” HSBC’s net profit in 2008 in the Korean market was 363.4 billion won. However, in 2012, the amount almost halved to 187.4 billion won.

In general, foreign banks tapping into a domestic consumer banking market is considered “extremely difficult,” according to another official from the FSS.

“In any country, the policy overseeing the financial industry including banking is very strict,” he said. “Banks are required to go through a strict license application process.”

Even Korean banks reaching out to overseas markets have a tough time.

As part of its efforts to localize in Korea, HSBC had attempted to purchase a local bank up for sale - including Korea Exchange Bank - but failed.

Last year, HSBC started negotiations to sell 10 of its retail banking branches to Korea Development Bank. But those talks fell through.

To overcome local barriers, Standard Chartered merged with Korea First Bank in 2005 to aggressively expand its retail operations in Korea. However, the outcome hasn’t been so satisfying.

On July 3, Standard Chartered Korea introduced a new package of services for its small and midsize customers, a move to focus on specific areas they may be able to better compete and profit in.

“As you can imagine, because it’s an attractive business [SME banking], it’s a very competitive place to be in banking,” said Tim Hinton, global head of SME banking at Standard Chartered. “Particularly in strong countries like Korea, the local banks are very strong here. They’re equally focused on serving SME banking.”

Hinton continued: “As we look forward and as we try to improve our business both in Korea and many places, we need to establish our strengths and our customer value proposition and the areas we want to focus.”

“In Korea, it’s not only the banking business in which foreign companies find it difficult to succeed,” said an official from a local bank. “For example, retailers like E-Mart and Lotte are huge here and they leave no room for outsiders like Wal-Mart. It’s the same with banks.”