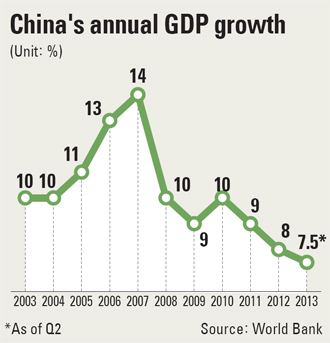 China’s economy slowed for a second quarter as growth in factory output and fixed-asset investment weakened, adding to risks that the government will miss its expansion target as Premier Li Keqiang reins in a credit boom.

Gross domestic product rose 7.5 percent in April-June from a year earlier, the National Bureau of Statistics said in Beijing, in line with the median forecast in a Bloomberg News survey and down from 7.7 percent in the first quarter. June production growth matched the weakest pace since the 2009 global recession.

The slowdown may increase speculation that policy makers will act to safeguard their growth goal of 7.5 percent for the year even as Li signals reluctance to boost stimulus and tries to reduce financial risks. With the International Monetary Fund last week cutting its outlook for global expansion, Li’s administration faces limits on turning to exports for support.

“The new government under Mr. Li should be seriously worried about the prospect as to whether they can meet the growth target,” said Liu Li-Gang, head of Greater China economics at Australia & New Zealand Banking Group in Hong Kong, who formerly worked at the World Bank.

Expansion should stabilize this quarter and may rebound in the following period “if monetary policy can quickly adjust to reflect the rapidly changing domestic and external environment and fiscal policy can be more active by targeting effective investment projects and technology upgrading,” Liu said. “Otherwise, the growth trajectory is heading to less than 7 percent.”

Sheng Laiyun, a spokesman for the statistics bureau, said at a briefing yesterday that the world’s second-biggest economy will have no problem achieving the 2013 growth target. The agency said in a statement that first-half growth was “generally stable,” with major indicators in a “reasonable range.”

“However, we are still faced with grim and complicated economic situations,” the agency said.

One such situation may be China Rongsheng Heavy Industries Group Holdings, the nation’s biggest shipyard outside state control, which said this month it’s seeking financial help from the government. Hebei Iron & Steel, the country’s largest producer of the metal by volume, warned last week its first-half net income will fall by 70 percent to 90 percent as the nation’s steel supplies outpace demand and prices drop.

China’s industrial production rose 8.9 percent in June from a year earlier, yesterday’s report showed. That compared with the 9.1 percent median forecast and a 9.2 percent gain in May. Last month’s pace matched the slowest since 2009, excluding figures for January and February, which the government doesn’t publish separately because of distortions from the weeklong Chinese New Year holiday.

Fixed-asset investment excluding rural households increased 20.1 percent in the January-June period from a year earlier, compared with the 20.2 percent median estimate in a Bloomberg survey and a 20.4 percent gain in the first five months.

Retail sales in June rose 13.3 percent from a year earlier after a 12.9 percent increase in May. The median forecast was for an increase of 12.9 percent.

Xia Bin, a former adviser to China’s central bank, said in a commentary on China Business News’s website today that “there is a de facto phenomenon of economic crisis in China.” The “eruption” of a crisis means bankruptcy for some companies and financial institutions, higher unemployment, reduced corporate and individual wealth along with a “withering of the economy,” Xia wrote.