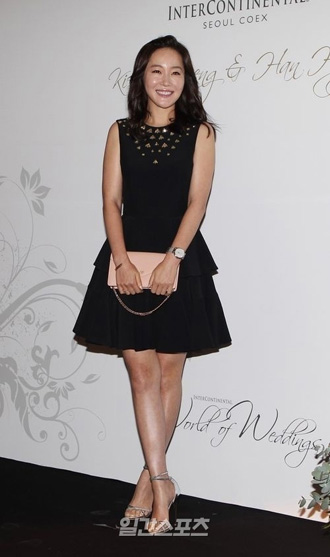 “The two started dating after [their] acquaintances introduced one another in the end of last year,” an official at Chaeum Entertainment said yesterday to Ilgan Sports, an affiliate of the Korea JoongAng Daily.

“They go to church together on the weekends and grow their love based on their religion.”

Before this relationship was confirmed, Uhm was rumored to be getting married soon as she caught the bouquet at the wedding of actress Han Hye-jin of the SBS talk show “Healing Camp” and footballer Ki Sung-yeung earlier this month.

Her agency said that she doesn’t have a wedding plan yet.

The boyfriend is also not so unfamiliar to the public, as he has published multiple essays he wrote during his travels across Spain. He also recently published another book, “Proposal” last month.

Given the title of the book, many are speculating whether the publication is Oh’s way of proposing to Uhm and wedding bells might be imminent.

Uhm, who made her acting debut in 2002, recently completed filming a movie named “Wish.”