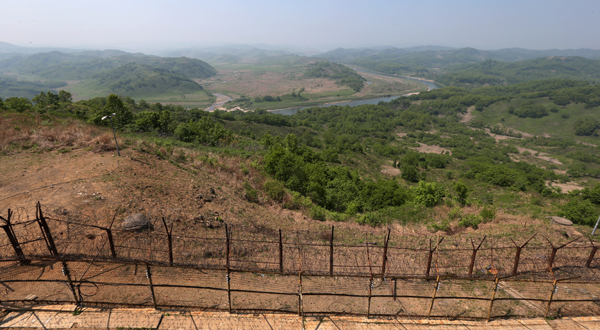 Landscape of the Demilitarized Zone from a typhoon observatory in Yeoncheon, Gyeonggi. [JoongAng Ilbo]

Korea’s political turmoil back in the 1940s and ’50s that followed the era of Japanese colonial rule and the 1950-53 Korean War did more than just divide the peninsula. Korea’s literature was also divided, with many writers judged on ideology rather than art.

Careers were ruined when the authorities cracked down on writers who would not toe the official line, be it writers who talked of independence under the Japanese or those who supported the Japanese after liberation, not to mention those who fell on the wrong side of the left-right divide between the North and South.

As Korea celebrates the 60th anniversary of the armistice that ended the 1950-53 Korean War on July 27, many are calling for a re-evaluation of the writers of that period, many of whom have been all but forgotten despite possessing great talent.

Renowned Korean writers, including greats like Lee Yuk-sa and Yun Dong-ju who hoped Koreans would live in harmony after liberation, were among the many who were sacrificed in the political turmoil. Lee only wrote about 40 poems in his lifetime, before dying in a Japanese prison in Beijing in 1944 at 39 years old. And Yun died in a Fukuoka, Japan, prison in 1945 for his role in the independence movement. Only the dedication of their colleagues kept their work alive after their untimely deaths.

For Lee, his poems were gathered by his brother Lee Won-jo and published as the “Yuk Sa Poem Collection” in 1946. Later, Lee Won-jo fled to the North and worked as a supporter of the leftists. It has been said that he came back to Seoul during the Korean War when the North took over the city, and helped judge and punish South Korean intellectuals. He also died in prison after he was accused of being a spy for the United States in 1955.

Yun’s collection of poetry, “Sky, Wind, Star, and Poem,” was only published in 1948 thanks to his fellow writers. One friend, Jeong Byeong-uk (1922-1982), who later became a Korean literature scholar, hid one of Yun’s three original copies through the occupation. Another friend, Kang Cheo-jung, completed the collection by adding more poems Yun sent him from Japan. Kang, who was a reporter for the Kyunghyang Shinmun at the time, showed Yun’s poems to the editor-in-chief at the newspaper, Jeong Ji-yong, and Jeong published one of Yun’s poems in 1947. When the collection was published in 1948, Jeong Ji-yong wrote the preface and Kang completed the epilogue.

The lives of Kang and Jeong unfortunately both turned tragic. Kang was sentenced to death for his left-wing activism. He was freed around the time of the Korean War, but soon went missing.

Himself a poet, Jeong is believed to have been kidnapped by the North during the Korean War, dying in Pyongyang when United Nations forces bombed the city. Jeong’s writings were forbidden in South Korea until 1988, as the government was unsure whether Jeong was kidnapped by the North or went voluntarily, but just to be safe banned him anyway. 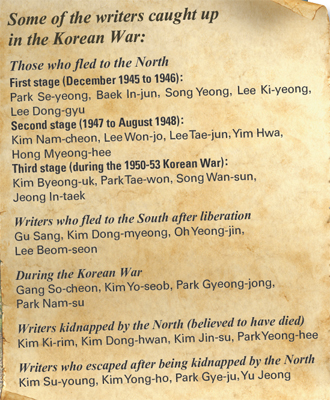 Those who fled to the North

Korean history has recorded that about 100 writers and intellectuals like Lee Won-jo absconded to North Korea during the Korean War. Some of them were forced while others willingly chose to side with the North. In all cases, tragedy waited them at the end of their path.

Many of those who went north were former participants of the Korean Artist Proletarian Federation, or KAPF, which was active toward the end of 1920s. After independence from Japan in 1945, the former KAPF writers exerted a great amount of influence in Korean literary circles.

But the federation was dominated by alumni of the Joseon Literary Writers’ Construction Headquarters, causing the KAPF writers to rebel, with many moving the North. With the South increasingly facing conflicts between leftists and the rightists, more writers continued to flee to the North until the First Republic was established in August 1948.

At this point, many of the writers who had been forced to work for the Joseon Literary Writers’ Federation after liberation dissolved the Federation and started to advocate for their real politics.

Around this time, many of the writers that had fled to the North started to come back to the South. They again opened an office in Jongno, next to the building where the Joseon Literary Writers’ Federation was first located. Many of the intellectuals and other writers were forced to become members of the new group, which offered ideology training and sent any actively anticommunist member to the political party to be tortured.

Iconic writer Yi Kwang-su also fell into the ideological battles of the period. Yi was famous for “The Heartless,” one of the first modern novels in Korea, but he was also famous for reversing his politics in the early 1930s and becoming a strong supporter of Japanese colonialism. Those pro-Japanese politics led him to being imprisoned in Seodaemun Prison after liberation. But he was also taken by the North during their invasion, and he died of tuberculosis on the way to Pyongyang in September 1950.

Other writers also suffered. Critic Kim Gi-jin was abused violently in the center of Seoul. Poet Kim Ki-rim, who, along with Jeong Ji-yong, had helped create modern Korean poetry in the 1930s, was kidnapped. Many other writers, including Lee Seok-hun, poets Kim Dong-hwan and Yim Hak-su, and critic Park Young-hee, were taken into custody by the North and are said to have died there.

While some were taken forcefully by the North, many others went willingly, including writer Park Tae-won, well-known for his “Novelist Gubo’s Daily Life.”

Those writers who defected joined the North’s literary circles and contributed to the development of North Korean literary history. Some were initially successful in resettling, gaining active roles in the North, including Lee Tae-jun, who found both official approval and widespread popularity for his epic novel, “The Gabo Peasant War.”

However, under the rule of Kim Il Sung, many of the defectors were soon purged. They were murdered or shipped off to the desolate countryside to spend the rest of their lives in miserable poverty. An initial purge targeted Yim Hwa, Lee Tae-jun, Lee Won-jo, Kim Nam-cheon, and other members of the Joseon Literary Writers’ Construction Headquarters. While many were killed, accused of being spies for the United States, many writers who were part of KAPF were able to settle in the North more successfully. 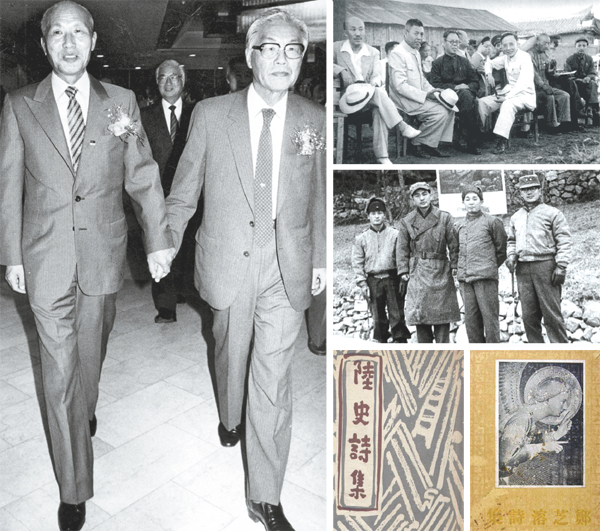 Left: Baek In-jun, left, head of a performing arts group from the North, holds hands with Hyun Seung-jong, managing director of a unification group from the South, at a meeting at the W Seoul Walkerhill Hotel in September 1985. Top right: Writer Hong Myeong-hee, who wrote “Yim Kkuk-jung,” far left, resting with other Chinese writers on Aug. 15, 1950 on the outskirts of Pyongyang. Middle right: Poet Gu Sang, second from the left, poses with others during the Korean War. Bottom right: A poem collection written by Lee Yun-sa, left, and by Jeong Ji-yong.

Left behind in the South

Writers Park Yeong-jun and Park Gyeo-ju, and poets Kim Yong-ho, Yu Jeong and Kim Su-yeong were among the writers who were forced to join the Joseon Literary Writers’ Federation. They had to gather in the federation’s office and receive ideology training supporting communism. They were forced to go out and join street protests, shouting slogans like “End the Syng-man Rhee Administration” or “Root out American Imperialism.” They also had to sing “Red Flag,” a communist propaganda song.

After they were taken to the North, many of these writers managed to escape back to Seoul. However, the city did not welcome the return of these writers, accusing them of voluntarily enlisting in the North Korean army and sentencing them to hard labor. Many later cleared their names by joining respected, non-political writers’ groups.

Writer Kim Su-young returned to Seoul by a different route. He was captured by the North Korean army as he fled to the South, risking death by firing squad for his trouble, but managed to escape again. He was captured by the South Korean Army when he returned and was put in a prison camp, as authorities doubted his story. Fortunately, he was saved by his knowledge of English, and eventually was freed in Busan and placed in charge of translating for medical army officers in the U.S. army.

While more than 100 writers fled to the North, a significant number chose the opposite path and fled to the South. Poet Gu Sang (1919-2004) left the North after one of his poems became the target of criticism by the Northern regime. Author Hwang Sun-won (1915-2000) made a similar decision after his poetry was criticized by the regime and his family’s wealth was taken in land reforms. Many other writers and poets also successfully fled to the South during the Korean War, as the UN forces swept across the North.

With all that these writers went through, it is time their lives and work is properly reconsidered, to show the full picture.


*Park Duk-kyu is a professor of literary creative writing at Dankook University.