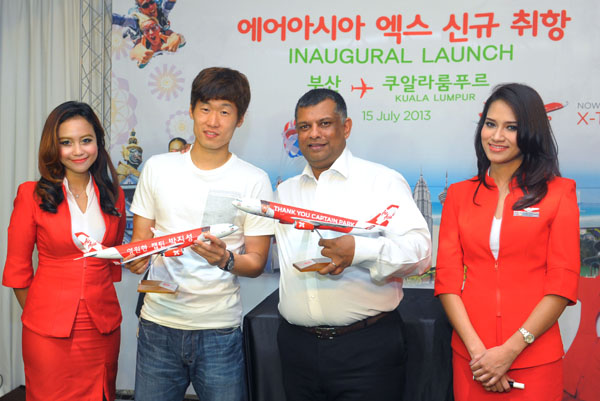 BUSAN - AirAsia CEO Tony Fernandes loves Busan, the nation’s second-largest city famous for its beaches. In fact, the CEO of the region’s largest low-cost carrier owns a house in the southern port city. He loves to drink soju, too.

Fernandes, the founder of Tune Group, which owns AirAsia, was at the launch ceremony for AirAsia X’s Busan to Kuala Lumpur route yesterday at the Paradise Hotel in Busan. AirAsia X, the long haul arm of AirAsia, celebrated its second international route after Seoul to Kuala Lumpur, offering a one-way ticket for just 80,000 won until July 28. It will fly four times a week.

Fernandes, who is also the owner of English football club Queens Park Rangers, was pumped for the event. Accompanied by footballer Park Ji-sung, who plays for QPR, the Malaysian CEO said he was “thrilled” to have a route that connects his homeland and a city in which he owns a house, although he admitted that he had to push his AirAsia team on this a little bit.

“Busan is a fantastic city but no one knows about it” said Fernandes. “The route is important because no one has done it and AirAsia loves to try new things.”

At the launch, Fernandes unveiled a miniature of an aircraft with Park’s photo on the fuselage, the first time the company has dedicated an aircraft to an individual. He said that AirAsia and the former Manchester United player have something in common, which is to make people dream.

“Ji-sung Park has changed Asian football in general, showing that Asians can play at a world level,” he said. “I started this company with two airplanes and a dream to provide experiences for those who had never travelled outside their homelands.”

According to the company, Malaysia had 283,900 tourist arrivals from Korea last year, up 7.8 percent from 2011. AirAsia X flew 239,191 passengers on the Seoul to Kuala Lumpur route last year, a sum nearly six times larger than when it began the route in 2010.

AirAsia X said it plans to fly 30,000 passengers on the new route through the end of this year, and more in the future.

The company was recently listed on the stock market and is planning to purchase 18 aircraft in the next three years, Fernandes said. AirAsia X currently operates 13 aircraft flying to 15 cities in seven countries.

“Our first goal is to make it [Busan to Kuala Lumpur] a daily flight,” he said.

Fernandes said he hopes to launch “AirAsia Korea” with routes to cities like Jeju or Daegu, and was confident that the company can successfully compete with local low-cost carriers.

“I’d love to [have AirAsia Korea] if the ministry allows me and if KAL and Asiana Airlines don’t mind us,” he said.

Fernandes denied again that his company might enter Korea by acquiring a local low-cost carrier. He said this is because the company isn’t good in M&As and doesn’t have good relationships with other airlines.