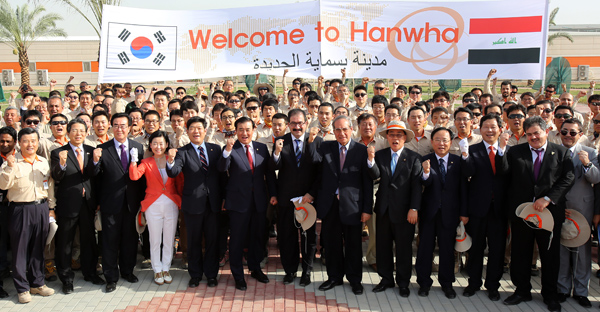 Despite Kang’s previous plan to tour Kenya and Tanzania from July 3rd, he included the Middle East country in his trip in an effort to support the biggest project received overseas in Korean construction history, which the conglomerate obtained in May last year at $8 billion (8.99 trillion won).

Kang had a meeting with Iraqi Prime Minister Nouri Kamal Al-Maliki in Baghdad, along with Korean lawmakers, the ambassador to Iraq and Hanwha E&C CEO and Vice President Kim Hyun-chung. They discussed ways to cooperate in rebuilding Iraq, including the roles of Korean conglomerates in the process.

“Overcoming the scars of the [1950-53] Korean War, we recovered the postwar residue and even achieved industrialization. Our construction companies have nurtured their own competency and technology,” Kang said. “With Hanwha’s leadership, I hope to see more Korean companies succeed in breaking into the Iraqi rebuilding market and becoming a helpful hand.”

Al-Maliki responded that he is greatly satisfied with the ongoing Bismayah project, as well as the technology and diligence of Korean corporations and workers.

“It’s not only Hanwha’s work; this project is also my own duty. I’m sure it will become a successful new city,” he said.

The trust between the two leaders has been oriented by Hanwha Group Chairman Kim Seung-youn, who visited Iraq multiple times despite safety issues and met the prime minister, Korean ambassador to Iraq Kim Hyun-myung said at the meeting.

“Despite such a trustworthy relationship with the chairman, the Iraqi government is getting more worried about previously discussed additional project orders worth $10 billion, due to the chairman’s absence in management lasting longer. There’s not much progress,” the CEO and Vice President said.

Back in 2010, the Iraqi National Investment Commission launched the national housing program to provide homes for a million citizens. The Bismayah project is the very first one; a public housing complex for 100,000 people in the region, located southeast of Baghdad. Its size is set to be six times bigger than Yeouido in southern Seoul and the Iraqi government will invest $266 billion into the project until 2017.

The current focal point for Hanwha E&C is to build the basic city infrastructure needed prior to starting full-scale construction, such as housing for the workers, a precast concrete plant and a water treatment plant.

The National Assembly leader headed to the half-finished construction site.

It would be an exemplary case for a creative economy and accompanied growth, he added, in which 550,000 jobs are generated per year, associated Korean industries develop and almost 100 partner companies advance in the Iraqi market.

As the construction further advances, more than 20,000 people will be committed to building the preliminary infrastructure until January next year. As soon as this is complete, full-scale construction will begin and 20,000 houses will be produced every year from 2015.

“Once the new 600,000-population city is completed in seven years, the rest of the world will be once again surprised by how powerful the Korean construction industry is,” Kang said.