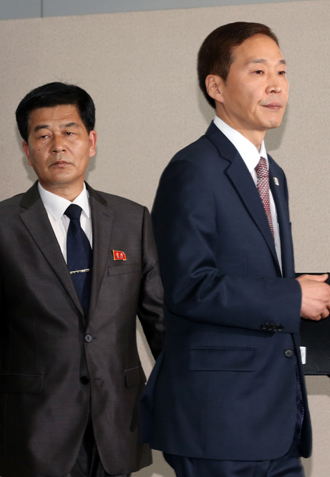 The two Koreas once again failed to reach agreement to reopen the jointly-run Kaesong Industrial Complex at a third round of low-level talks yesterday.

Negotiators from South and North Korea could not narrow the gap in their positions over four negotiating sessions held between 10:08 a.m. and 5:07 p.m. in the eight-year-old industrial park located in Kaesong, which has idled for more than three months due to frosty inter-Korean relations.

Both sides agreed on a fourth round of talks on Wednesday in Kaesong.

In yesterday’s third round, the two sides sparred over the same issue that made the first two rounds fail: Whether Pyongyang would give a concrete pledge not to hold the complex and its businesses hostage when ties between the two countries deteriorated.

South Korea adhered to a so-called “constructive normalization” principle, which demands the North accept some kind of legal measures to keep the businesses from being shut down or disrupted in the future, protecting the investments of Southern businessmen operating in Kaesong, Kim Ki-woong, the South’s chief negotiator for the third round, told the Joint Press Corps in Kaesong yesterday after the talks.

In April, North Korea unilaterally imposed an entry ban on all Southern workers and cargo into the park, apparently angered by the Korea-U.S. joint military drills in March and the UN Security Council’s tougher sanctions.

North Korea wants an immediate resumption of business at the complex.

“North Korea repeated its previous request to resume operations at the Kaesong park as soon as possible, but they didn’t propose specific methods to do that,” Kim said. “It also maintained the same position on the cause of the shutdown.”

North Korea has asserted that the South Korean media insulted its “utmost dignity” by saying the impoverished regime would never be able to shut down the complex because it was a vital source of hard currency.

For the third round, North Korea yesterday changed one of its three negotiators, according to the Ministry of Unification, after Seoul named Kim as its chief negotiator Friday.

Hwang Chung-song, an advisor of the National Economic Cooperation Federation, a North Korean organization under the ruling Workers’ Party in charge of inter-Korean business, replaced Ho Yong-ho, head of the Pyongyang Law Office.

Hwang, 40, attended three low-level talks in 2009 over the Kaesong complex and worked as an assistant at the 2010 inter-Korean Red Cross talks. He was also a negotiator at a higher-level meeting on June 9.

Although the Unification Ministry didn’t say why Pyongyang changed its negotiator, it appears to be linked to Kim Ki-woong taking over as lead negotiator for the South.

At the 2009 Kaesong talks, Hwang met Kim, who was a negotiator for the South.