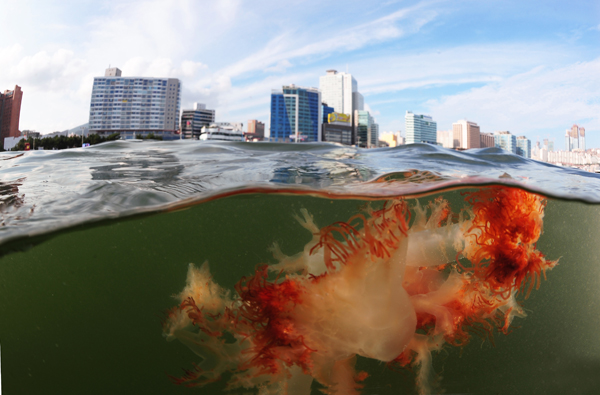 Swarms of massive jelly fish are expected to encroach into waters off the nation’s beaches this summer. This photo features a Nomura’s jellyfish spotted off Haeundae Beach, Busan last year. The massive creatures can weigh up to 200 kilos (441 pounds) and measure up to two meters (6.6 feet) in diameter. Provided by Kookje Newspaper

The population of a giant species of stinging jellyfish has been rapidly expanding in waters off the south of the Korean Peninsula.

The deluge of massive creatures is also spreading to the west coast, alarming local governments in the affected regions as they brace for peak summer vacation season between mid-July and mid-August.

The Ministry of Oceans and Fisheries and the South Jeolla Provincial Government said yesterday that their numbers in waters off Daehuksan Island in Sinan, South Jeolla have skyrocketed over the past year.

While only one or two could be found in 10,000 square meters (2.47 acres) of water in the past, they discovered on Saturday that now there are around 800 in the same area.

“It’s hard to say that the population has increased 400 times because we only searched a part of the area,” said Yoon Deuk-won, a researcher from the National Fisheries Research and Development Institute. “But because the number of jellyfish in Chinese waters has been rapidly increasing recently, there’s a high possibility that the population will increase by at least 20 times over last year in Korea.”

The research institute said that in May, they studied the Chinese ecosystem, including that around Shanghai, and found that the jellyfish population had spiked 23 times in the course of just a year.

“The number of jellyfish has rapidly increased because the number of mackerel and filefish, which feed on baby jellyfish, has decreased.”

The institute said they will scour the seas off Korea’s southern and western coasts tomorrow to get a better idea of just how big the Nomura’s population has become.

On Aug. 10 last year, an 8-year-old girl died after she was stung by a Nomura’s jellyfish at Eulwangri Beach in Incheon.

The institute added that they’ve already told officials at the affected beaches to set up nets to keep swimmers safe. Haeundae Beach in Busan is currently setting up a net about 1.4 kilometers (0.9 miles) offshore.

Nomura’s jellyfish are also a problem for fishermen. They indiscriminately consume plankton, which is the food source for many types of fish. Many fishermen in Mokpo and Sinan, especially shrimpers, have given up on the profession due to the plague of giant jellyfish.

With no proper solution to the problem in sight, fishermen, local governments and the fisheries ministry are left to worriedly watch as the number of Nomura’s jellyfish continues to balloon.

Some fishing boats currently put a grinder at the stern where the fishing nets hang to kill approaching jellyfish. But at 20 million won ($17,780), the device is prohibitively expensive.

Nomura’s jellyfish never used to be found in Korean seas.

But with rises in water temperatures due to global warming, they started to appear in 2003. The average weight of the ones found last week was between 30 and 45 kilos.