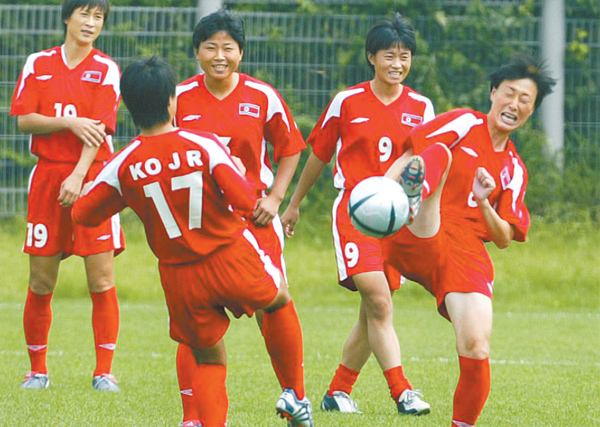 The North Korean women’s football team practices at Seoul World Cup Stadium in this 2005 file photo. The team will revisit the South tomorrow for the East Asian Cup in Seoul, where they will play the South on Sunday. [NEWSIS]

Expectations are rising ahead of the East Asian Cup that a rare match between the women’s football teams from the two Koreas could trigger a fresh round of sports diplomacy amid lingering tension on the Korean peninsula.

The match-up at the Cup in Seoul on Sunday will be the first time a North Korean football team has visited the South since April 1, 2009, when the men’s national teams from both Koreas played each other for qualification in the 2010 South Africa World Cup. The women’s team from the North last visited the South in 2005 during the East Asian Cup, a triennial event.

According to the Seoul-based Korea Football Association (KFA), 36 players and officials from the North will arrive in the South tomorrow via Beijing. After playing with the South, the North team will play Japan on July 25 and China on July 27. They are scheduled to leave the South on July 28.

Launched in 2003 by the East Asian Football Federation (EAFF), the Cup pits regional powers against each other, including Korea, Japan and China, the three fixed participants. The North’s women’s team made it to the four-nation final through the preliminary stage. The North’s men’s team failed to qualify this year. Australia will join the three East Asian teams in the men’s final.

Football played a catalytic role in inter-Korean sports diplomacy. In 1990, an annual football derby between Seoul-based Gyeongseong FC and Pyongyang-based Pyongyang FC, which lasted between 1929 and 1946, was revived and men’s teams from the two Koreas played friendly matches in Seoul and Pyongyang in October of that year.

A reconciliatory mood created by the football exchange led the two Koreas to agree to field a unified team in major international sports events. A unified team participated in the World Table Tennis Championships and the world’s youth football championships, both in 1991.

The dwindling inter-Korean sports exchange got another boost from the first inter-Korean summit in June 2000, and the two countries fielded a unified team 10 times since the Sydney Olympics in 2000 until the exchange died down under the conservative Lee Myung-bak administration.

Recently, the inter-Korean relationship is showing a sign of recovery with the two Koreas talking with each other regarding the reopening of the Kaesong Industrial Complex. In line with the mood, North Korea’s football authorities informed the KFA on June 27 that it would send its women’s team to the East Asian Cup. The South Korean government endorsed the move immediately.

Seoul is hoping that the East Asian Cup could provide momentum for inter-Korean exchange.

The South Korean government reportedly asked North Korea last month to participate in the Asian Games, to be held in Incheon next year. The Korean Basketball League is also looking at the possibility of inviting North Korea’s men’s basketball team to the South for a so-called inter-Korean Basketball Festival.

According to KFA officials, there is a chance that representatives from the two Koreas could meet with each other off the field during the East Asian Cup.

“Basically, we have three banquets, hosted by the KFA, and the EAFF and the promoters, and the representatives of the teams are expected to be invited,” said an official of the KFA. It is not known yet whether the coaches and the players would participate in the banquets, the official said.