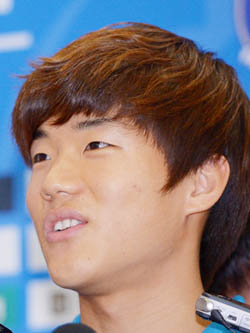 Champions League runner-up Borussia Dortmund has made an offer to Ryu Seung-woo, the Korean teenager who shone during the recently-finished U-20 World Cup, according to his Chung-Ang University coach Cho Jung-ho yesterday.

Earlier in the day, the Kicker, a German media outlet, reported that Ryu will join Dortmund. Cho confirmed to Ilgan Sports that the Bundesliga club sent a letter to Ryu with an offer, but denied that a deal was made.

The coach, who is representing Ryu at the request of his family, declined to give details of the terms of the offer, but said it was not satisfactory.

Cho said that some other European clubs are also showing interest in him and he will wait before deciding on the Dortmund offer.

“In addition to Dortmund, a number of clubs in such places as Spain and Portugal are showing interest in Seung-woo,” Cho said. “There is no reason to send him to Dortmund on terms that are not good.”

“I said to Seung-woo that we could wait longer as the European transfer window is open until August. There could be another team with better terms.”

Dortmund paid 350,000 euros ($458,500) as a signing fee to Cerezo Osaka in 2010 when it signed Shinji Kagawa, then a 21-year-old Japanese prospect who eventually became a star midfielder for Manchester United.

Ryu was reportedly offered a salary of about a tenth as much as Kagawa’s salary by Dortmund.

“The amount Dortmund offered to Ryu was a little bit higher than what a rookie in the Korean league is offered,” Cho said.

“If he fails to earn his spot at Dortmund, he can’t come to Korea for five years and could become an international orphan.”

“I was embarrassed to find an article which said my son was confirmed to sign Dortmund,” Ryu Jae-geun told Ilgan Sports. “I have entrusted everything about my son to Chung-Ang University coach Cho Jung-ho. I am certain he will make a choice that will help Seung-woo grow as an athlete.”

Ryu, a sophomore at the Seoul-based university, scored two goals for Korea in the group stage of the U-20 World Cup, helping the squad advance to the round of 16 as a wild card team. The 19-year-old winger, however, had to sit out the last two matches due to an ankle injury he sustained in the final group stage match versus Nigeria.

Ryu is currently rehabilitating from his injury with the Chung-Ang team and should be able to join them for the annual university football tournament that starts Monday in Taebaek, Gangwon.