A poster for the play “Gismonda,” which shot Alphonse Mucha to fame.

For most renowned artists, it’s often one song, painting or design that shoots them to overnight fame. For the Beatles, it was the single, “Love Me Do,” which some consider to have opened up a new era of rock ’n’ roll. More recently, it was “Gangnam Style” for the Korean rapper Psy.

For Alphonse Mucha, an iconic figure of the Art Nouveau movement from the Czech Republic, it was a single poster, “Gismonda.”

“It was a day after Christmas and the greatest French actress of the time, Sarah Bernhardt, was worried about the design of a poster for her new play that was scheduled to be introduced to Parisians on New Year’s Day.

“My grandfather, who couldn’t take a Christmas vacation as he had no money, was given the opportunity to design the poster,” said John Mucha, president of the Mucha Foundation and the artist’s grandson, who attended the opening of Alphonse Mucha: Art Nouveau & Utopia, the first Mucha exhibition in Korea.

Art lovers in Korea will be able to experience the lush beauty of Mucha’s flowing and elegant works at Seoul Arts Center’s Hangaram Museum until Sept. 22, as 235 of the painter’s works, along with related videos, photographs and artifacts, will be displayed.

Mucha (1860-1939) is most remembered for the prominent role he played at the turn of the 20th century in the shaping of Art Nouveau, which is French for “new art.”

The movement influenced much of the decorative arts from the mid-1880s to 1910, including painting, jewelry, glassware, pottery, textiles, graphic work and architecture.

The six-part exhibition examines Mucha’s role in the Art Nouveau movement as well as his family history, photography and his dedication to the Slavic people.

“A Bohemian in Paris,” the first section, looks at Mucha’s origin as an outsider of the French establishment. Here, viewers learn about “Gismonda,” which changed how posters were made with its use of long, narrow shapes and muted colors. 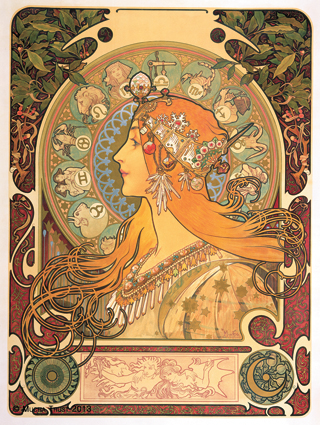 “Parisians paid poster hangers for copies, or simply stole the posters right off the streets,” said curator Choi Ahn-na. “Sarah Bernhardt was so pleased with Mucha’s work that she offered him a five-year contract to produce posters as well as stage and costume designs.”

The second section, “The Creator of ‘Le Style Mucha,’ ” features Mucha’s posters from the 1890s that took center stage in Paris. This section includes works like “The Seasons: Spring, Summer, Autumn, Winter,” and “Zodiac,” a decorative panel originally designed for a calendar.

The third section, “A Cosmopolitan,” features Mucha’s works for the 1900 Paris Exhibition.

This section portrays Mucha as a cosmopolitan and international celebrity.

The fourth section, “The Mystic,” features Mucha’s works from the late 19th century as he was drawn to spiritualism. This section looks at how Mucha’s spiritualism influenced the development of his artistic philosophy and style.

His works from this time period include “The Arts: Dance, Painting, Poetry, Music.”

After a successful career in Paris and the United States, Muscha returned to his homeland in 1910. The fifth section, “The Patriot,” highlights Mucha’s two famous national works - murals for the Municipal House in Prague, and “The Slav Epic.”

The final section, “The Artist - Philosopher” includes three of Mucha’s preliminary designs for the stained-glass window at St. Vitus Cathedral in Prague.