Is 20-km standard down the road?

Is 20-km standard down the road? 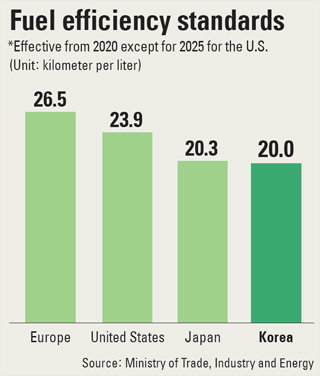 Automakers are likely to come under more pressure as the government considers increasing the corporate average fuel efficiency standard to 20 kilometers per liter (47 miles per gallon) by 2020.

According to industry sources, the Ministry of Trade, Industry and Energy and the Ministry of Environment plan to tighten the regulation that sets minimum average fuel-consumption levels for passenger vehicles with 10 or fewer seats.

The energy ministry said nothing has been decided, but a standard for 2020 will be announced at the end of this year after consultations with the auto industry.

In 2009, the government set the corporate average fuel efficiency standard at 17 kilometers per liter by 2015. Automakers that fail to meet the standard would be subject to fines.

According to the latest data from Korea Energy Management Corporation, no Korean-made cars meet a standard of 20 kilometers per liter, whereas foreign models like Toyota Prius and Peugeot 208 easily surpasses the standard.

“If the fuel efficiency standard is finalized, it could be a big wake-up call for automakers who specialize in big cars like SUVs or luxury sedans,” said a marketing executive for a Korean automaker, on condition of anonymity. “Of course, the move will push every car producer to develop its fuel-efficiency technology, but it will be better if the government can be lenient with some models.”

Renault Samsung Motors has already moved to take the lead in the electric vehicle market. The Korean unit of French automaker Renault said Monday it began accepting orders for its compact EV SM3 Z.E. scheduled for delivery in October

The price of the SM3 Z.E. will start at 45 million won ($40,200), but the company said buyers will be eligible for government subsidies. The Ministry of Environment has earmarked 15 million won for buyers of electric vehicles in 10 areas, including Seoul, Daejeon and Jeju. The Jeju regional government will put up an additional 8 million won to offer as incentives to 160 buyers.

Kia Motors, which produces the Ray EV for government offices, is also set to boost marketing to private buyers. The company also plans to introduce an electric version of its Soul next year.

GM Korea expects to introduce the Chevrolet Spark EV by the end of September. The city car will be made at the company’s Changwon plant and also sold in California and Oregon.

Hyundai Motor has high hopes for its Tucson ix hydrogen fuel cell electric vehicle that it rolled out in February. The company plans to supply more than 1,000 units globally by 2015.

“We will reinforce its R&D effort on reducing vehicle weight, and enhancing the transmission and engine to meet the fuel-efficiency standard,” said an official from Hyundai. “Releasing vehicles with a new type of power source will also be the key.”