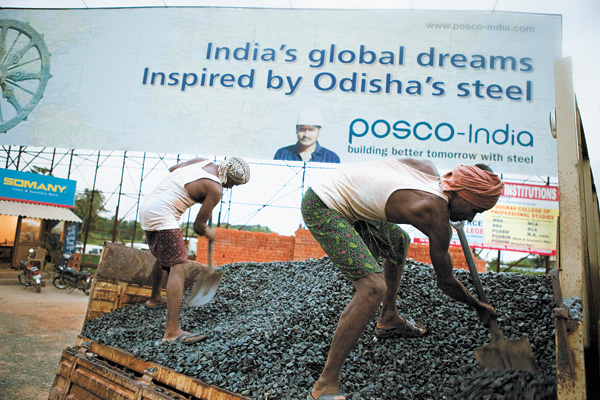 A Posco-India billboard is displayed on National Highway 5 in Bhubaneshwar, Orissa, India, in 2010. The plant has been delayed since 2005, but construction may begin soon. However, fearing another long delay, Posco may pull out of another steel mill project due to public opposition. [BLOOMBERG]

Korea’s top steelmaker Posco is considering pulling out of a $5.3 billion mill project in India’s Karnataka state because of opposition from residents and political instability, a source said yesterday.

The situation highlights the challenges facing Posco as it tries to gain a foothold in India and tap into the country’s iron ore reserves and customer base. The steelmaker is trying to expand overseas to offset competition from smaller rival Hyundai Steel.

“Posco is in internal talks to quit the Karnataka project because protests by local residents make it difficult for us to acquire land,” said the source, asking not be identified because the discussions are confidential. The source added that the world’s No. 5 steelmaker by output will make a decision this week about whether or not to drop the plan to build a mill in Karnataka capable of producing 6 million tons of steel a year. Posco signed a preliminary agreement with the state in 2010.

The source said Posco would, however, proceed with another steel mill project worth $12 billion in the eastern state of Odisha.

“Expectations for Posco’s India projects have already been lowered,” said Choi Moon-sun, an analyst at Korea Investment & Securities. “Posco needs to make investments in an effective manner .?.?. It is not easy for Posco to pursue both of the projects in India.”

Posco’s Odisha project in May overcame one of the last legal hurdles to the granting of a mining license, raising the Korean company’s chance of getting preferential access to iron ore.

The Korean steelmaker has waited eight years for the necessary clearances, land and mining license to start work on the project, billed as India’s largest foreign direct investment.

While the project may still face obstacles from protesters and over issues such as land ownership, a supportive federal government is expected to clear the path for Posco’s top concern - a captive mine that will give it iron ore.