Ahn leads National Theater in a resurgence of tradition

Ahn leads National Theater in a resurgence of tradition 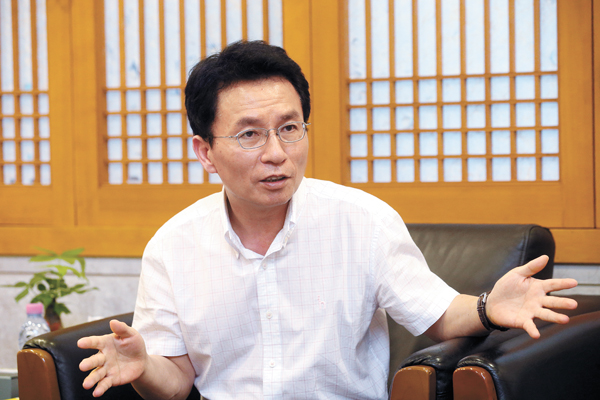 Ahn Ho-sang, President of the National Theater of Korea

The National Theater of Korea has grown “younger.” Typical gugak (traditional Korean music) performances that used to bore even patriotic audiences are nowhere to be seen, thanks to the “repertoire season,” a project launched by the state-run theater in an attempt to provide a breath of fresh air into the 63-year-old theater.

By appointing renowned creative teams from home and abroad, the theater has been introducing new material for its first edition of the “repertoire season,” which ended with applause at end of last month. It introduced 55 new works, including 13 from resident companies.

The National Changgeuk Company, in particular, received great attention by introducing new works that mix musical theater to produce changgeuk (traditional Korean opera) such as “Janghwa Hongryeon” and “Seopyeonje.” The National Dance Company’s “Alter,” a collaborative work from renowned choreographer Ahn Sung-soo and popular fashion designer Jung Kuho, also was in the spotlight, drawing young theatergoers to such performances that had long been considered boring and difficult.

Many culture critics refer to the National Theater of Korea’s “repertoire season” as the “wind that brought about a dramatic change” in performing arts in the past year.

Early this month, the National Theater of Korea announced its second edition of the “repertoire season.” Among 63 works are scheduled for the second edition, which kicks off on Aug. 14 and runs until June 28, 2014, eight new works from the first edition will be repeated and 13 new works introduced.

The man leading this transformation is Ahn Ho-sang, 54, president of the National Theater of Korea. As one of the founding members of the Seoul Arts Center, Ahn has been working on the front line of the country’s performing arts circle for the past 23 years. Since 2007, Ahn has established various cultural content for the capital city including the Hi Seoul Festival and Seoul Spring Festival of Chamber Music as the director of the Seoul Foundation of Arts and Culture.

In order to fulfill the management target, the major business for the theater had been long-term rents to musicals and outdoor activities, while performances from state-run companies had been laid aside.

Upon Ahn’s appointment as president in January of last year, he immediately launched the “repertoire season” in an attempt to overcome the reality the theater had been facing.

“If things go on like this, I thought it will even become difficult to sustain the real essence of the National Theater of Korea’s existence. Attempting something new was inevitable to protect the mission of the state-run theater,” said Ahn.

The global trend of performing arts eyeing Asia also contributed to Ahn’s decision to quickly launch the seasonal repertoires. Ahn said he felt anxious because there’s no signature performance in Korea like the kabuki in Japan attracting Europeans, while China’s Beijing Opera is becoming a must-see performance for tourists.

“We are in an age where shadow play of Indonesia influences the world-class musical ‘Lion King.’ Creating content with Korean traditional culture such as pansori or fan dance became a mission that can no longer be delayed. There are about 12 million visitors to Korea every year, and I believe there are bound to be foreigners who are eager to see the essence of Korean culture in Seoul. There’s Bolshoi Theater in Russia and the Royal Opera House in England. A country should have a representative theater venue to keep up with the times,” said Ahn.

Despite Ahn’s grand announcement “that the National Theater of Korea will launch a new beginning,” he was faced with the fact that there was no signature repertoire of the theater that he could bring to the fore. That meant that he had to create new works, but the theater had no money for it. Most of the budget was used to bring in foreign works while resident companies were tied down to the old custom of creating “the same old” works, despite having the country’s best talent. Ahn says he had no choice but to bring in artistic directors from outside the theater as an “emergency measure.”

“At first, they were hesitant to participate, saying they were unfamiliar with traditional arts. But after a series of requests, I was able to bring them in to help the theater. Through their participation, the works within the theater started to gain media attention along with improvement in the theater’s presence, and the whole atmosphere changed. Many renowned artistic directors such as Jang Yoo-jeong and Ko Seon-woong have decided to take part in the second edition despite their busy schedules. Traditional arts becoming one of the genres that the artists want to have a go at directing, I believe, is already a dramatic change.”

After the first edition of the “repertoire season,” the theater’s regular repertoire has been increased and the number of visitors doubled. However, Ahn cites the change that took place within the psychology of the members of the resident companies - their restored self-esteem - as the “most valuable change the theater experienced.” For many years, the National Theater of Korea experienced a series of complicated issues, including its labor union splitting in two, discord between intern and regular members, and the audition system.

Ahn approached the members using the “standard tactic of promising them they’ll be respected and acknowledged as artists.”

“As the members had been feeling the lack of a sense of existence, their true characteristic of ‘artistic professionalism’ had been wrecked. They had no opportunities to feel the pride of being the best artists of their time, despite joining the theater after fierce competition. I thought the best method was to allow them to receive applause onstage and feel deeply moved. I also tried to keep the promise that I’ll make them stand out by producing great work. Fortunately, the whole atmosphere inside the theater changed, we all started to feel this freshness. The members themselves began coming up with suggestions for next work. Wouldn’t you call that alive?”

Thanks to numerous efforts to create new repertoire, the National Theater of Korea has placed itself as an “active production base for Hallyu [Korean wave] content.” In June last year, the National Orchestra of Korea opened up the K-Music Festival in London and received a standing ovation. Next year, the company is planning a concert in Turkey. The National Dance Company also received a love call from Germany’s Dresden Semperoper with its repertoire, “Korea Fantasy.”

“Producing great content has become an urgent matter as the interest and demand in Korean traditional culture has been increasing. I’ve witnessed foreigners getting mesmerized by the lines and movements of the Korean dance. They cry upon watching the gut performance, or the traditional rite of shamanism, without even understanding the story,” said Ahn. “Our traditional culture is qualified enough to impress the international audience and we have to prepare for such opportunities.”

But before getting “overexcited” to turn traditional Korean performances into competitive Hallyu content, Ahn says the shows first have to receive positive responses from Koreans.

“With only 1 percent of Koreans who consider themselves theatergoers for traditional performance, the urgent homework is developing a new stratum of audience.

“For the past 100 years, Koreans have been so exposed to Western culture and performing arts that they feel unfamiliar with their own culture and arts. It’s important to make them feel comfortable around something of their own. We have to throw away the stereotypes we have on traditional arts and stimulate the young Koreans’ curiosity to draw them to the theaters for traditional performances,” said Ahn.

“I believe such criticism and discussions are positive and it should become more active. The history of modern Korean dance is less than 100 years and who can conclude or define its direction? It is our goal to embrace both the traditional and innovation while moving forward with a contemporary tradition,” said Ahn.

“In this 21st century when people are thirsty for a new cultural shock, London or New York hasn’t been providing as fresh a shock as they did before. The focus is now moving toward Northeast Asia. I believe Seoul will become one of the cities that will allow people to have such expectations.”